You can’t spend long around Adventure Gamers without hearing the name Samorost spoken of in fond terms. And for good reason. The browser-based flash series has become a cult hit entirely on merit, offering a simple but utterly endearing gameplay experience with a refreshingly offbeat aesthetic. The first game was even free. Willing to pay for the privilege, many of those who played it at the time gave voice to sentiments like “more, please!” Independent Czech developer Amanita Design was obviously listening, and decided to make a slightly bigger sequel and charge nominally for it. The result was more delightful Samorost goodness, and they even gave about half of that game away for free in the playable sampler. Once again, players were left echoing the familiar refrain of “more, please!”

Well, we aren’t getting more Samorost (at least for now), but we soon will be getting the first full-sized adventure game from Amanita called Machinarium. Release is still several months off, but I recently had the chance to put an unfinished version of game through its paces for several hours, and already I can utter those same two words with great enthusiasm:

Like its predecessors, Machinarium practically oozes charm. If you’re not captivated by this game within five minutes of play, you should check for a pulse. Gone is the photo-realistic (if strangely surreal) organic environments of Samorost, exchanged here for a sketch-art depiction of a desolate mechanical world. Usually the phrase “hand-drawn” comes with the implicit qualification “but still looks like a computer game” attached. Not so for Machinarium, which really does look like a sketchbook brought to life. A very detailed, visually stunning sketchbook, mind you. Each screen is packed with stylish visual touches, even if the world they’re depicting looks like an unpleasant place to be, from its mountains of stacked refuse in the backgrounds to its rust-stained equipment and wall-cracked underground interiors. It’s beautifully ugly, if you will. There is even a gentle bit of ambient animation, like a little robo-bug scurrying around or drops of water dripping into a pond, and the action is accompanied by an eclectic blend of tunes that nicely support the quirky nature of the game. 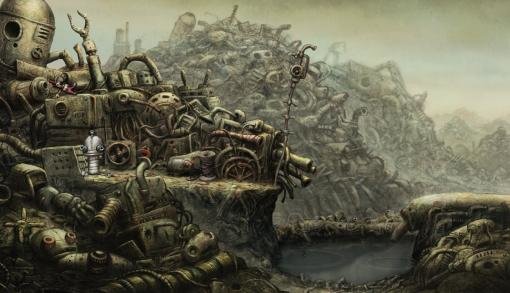 You arrive in these decrepit surroundings by means of a flying garbage vehicle from an imposing tower-filled city, which deposits your broken remains rather unceremoniously at the start of the game. Luckily, you’re a robot (like every other character in the game), so this condition isn’t as serious as it sounds. It is, however, a predicament that needs solving, and assembling yourself back together represents the first challenge of the game. This is done by means of a tutorial-like puzzle sequence that introduces the game’s mechanics.

Anyone who has played Samorost may be wondering “what mechanics?”, but there is more to Machinarium than merely clicking on the right objects in the right order at the right time. There is still some of that involved, as Amanita has clearly gone the “if it ain’t broke, don’t fix it” route, so experimentation is encouraged. You’ll need a sharp eye, too, as hotspots aren’t labeled but represented only by a faint change in cursor brightness. In order to fix the many things that are broken, on the other hand, more challenge means more actions involved, which certainly helps the gameplay hold up over the course of a much longer play session. After a few hours of Samorost, you were done. After a few hours of Machinarium, I felt like I’d barely scratched the surface, marvelling at how difficult the game had become.

The strictly point-and-click basics aren’t hard to master, of course. As a little robot, you can walk around and use interactive items, picking some up and adding them to your inventory. The latter is a gas. Ever wonder where adventure game protagonists store their inventory? There are no such mysteries in Machinarium, as you’ll flip your lid (literally) and swallow items whole, or suck up stringy items like spaghetti; just two of many carefully crafted, often amusing character animations throughout the game. The inventory is easily accessed via scroll bar at the top of the screen (which does have a tendency to jump into view unwanted at times), and from there you’ll need to combine some objects together. You’ll also encounter some environmentally-clued codes to crack, machines to operate, and standalone logic puzzles as you go.

All this is very standard adventure game content, and indeed, for those who argued the Samorost series barely qualified for the genre label, no such disputes will be leveled at Machinarium. The game does have a few additional tricks up its sleeve, however. Most notable is the ability to pull and squish yourself into taller and shorter versions of your robot self. This matters, because you can only interact with items that can be reached on your current plain. In fact, interactive items don’t even reveal hotspots unless at the right height. This sounds like a minor deviation, but it’s cleverly implemented, and you’d be surprised how often you forget to think vertically. Or perhaps not surprised at how often I failed to. You’ll also need to be on the watch for location-specific actions such as climbing, jumping, or diagonal movements that aren’t available elsewhere. (Did I mention you need to think vertically?)

The game’s first four screens (which took a lot longer than it sounds) are all self-contained, escape-the-room scenarios, but unlike its Samorost progenitors, Machinarium soon broadens into a more open-ended design. Progression is still linear in the sense of constantly making your way back towards the city, but items or clues from as many as four or five screens are soon necessary to solve puzzles elsewhere. The number of interactive elements in each area is never overwhelming, but there are always enough options to challenge, particularly since the solutions often require some outside-the-box thinking. Some of the early goals I faced included providing a forlorn prisoner with a homemade cigarette, distracting a ballbearing-packing guard, and disguising my robo-self for access over a drawbridge. None of these tasks are overly complex on the surface, but there is very little feedback along the way, as the protagonist merely shakes its head at incorrect solutions, never speaking or offering you guidance. 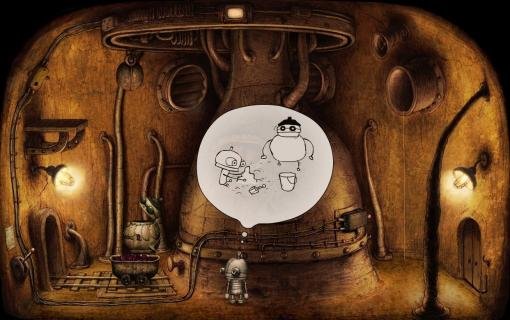 This lack of feedback isn’t as restrictive as it sounds, fortunately. Although mute, our robotic hero does have thoughts that appear in visual bubbles, offering some insight into his world and allowing for basic communication with the other characters he meets. This is the primary means of advancing the story. To be sure, Machinarium is anything but a plot-heavy game, but it establishes early that the little outcast must return to the city in order to stop a group of thugs who are threatening its welfare – the same “Black Cap brotherhood” responsible for landing him in this mess in the first place. This notion is reinforced periodically through other events, either personally experienced or seen from afar, just so you never lose sight of your purpose. At first you’ll understand very little of what has happened, but as you meet new characters and learn how their own stories fit into the larger picture, slowly but surely the pieces will begin falling in place. As with Samorost, it’s a pretty lightweight premise with moments of good-natured fun, but it’s more than substantial enough to hold its events together cohesively.

How long the journey lasts and where the tale ends I still don’t know myself, but I do know that I’ll be one of the first in line to find out when the game launches this fall. The game’s creator, Jakub Dvorský, says there will be 30 locations all told, more than 30 characters to meet, an hour of orchestrated music, and over an hour of detailed animations, so there are no corners being cut on effort by such a small team as Amanita. Even so, Machinarium won’t be the biggest or most dynamic of adventures ever made, but it does show early promise to be among the best of what independent endeavours can be: a one-of-a-kind title that embraces its limitations (no voiceover budget? -- no problem!) and adapts them to best highlight its strengths. With its jaw-dropping artwork and deceptively simple gameplay, it’s got beauty and brains, and for a game about robots, it’s easily one of the most “personal” adventures in the genre today. So reserve a special place in your heart for this one, as it sure looks like you’re going to need it. Even if you’re a robot.

Update: Days after posting this preview, a pre-order deal was unveiled by Amanita, offering a discounted price, 5 hi-res pictures, and 5 MP3 tracks from the Machinarium soundtrack.

kyubajin
Preordered :) I wasn't sure before but this preview opened my eyes!

Mastik
I can't stop looking at those pictures, like somrt sort of mix of Fallout, Wall-E & Beneath a Steel Sky

Jackal
And as I also said then, the [i]idea[/i] behind Full Pipe was great - a great idea that was turned into a lousy game for all kinds of reasons [i]not[/i] found in this one. There's more to quality than good intentions, and I'm happy to see Machinarium get it right. There are certainly some similarities between the games, just like there are many similarities with other adventures now. As far as inspriration goes, however, it hardly needed Full Pipe to draw from when it already had Samorost.

Ariel Type
Ha, talk about inspiration. This looks very much like Full Pipe, which you defamed cruelly.

Dodger777
The look of this game makes me think of that old classic Beneath a Steel Sky !

kadji-kun
What an absolutely amazing art style. I loved Samorost. Looking forward to this now.