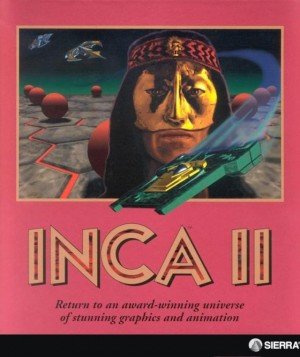 Installed as Great Inca, El Dorado has at least reunited the four quarters of the Empire. But a mysterious asteroid is meancing the harmonious balance that our old and powerful planet has built up over the centuries. Has Aguirre, the Conquistador, really manged to gain control of all the asteroid’s potential might? Athualpa, the young, hotheaded son of El Dorado, sets out to counter the new threat, despite the advice of the Sages and against his father’s wishes.

Stuck in Inca II, or looking for the best way to proceed? Click below to view our walkthrough for Inca II and wonder no more!

No videos for Inca II available (yet)

What our readers think of Inca II

There haven't been any reader that reviewed Inca II yet. Please share your (short) verdict, a review or post your star rating!

A Collection of Bad Moments

The Bizarre Adventures of Woodruff and the Schnibble

Inca II is an adventure game, released in 1993 by Coktel Vision. Inca II has a Illustrated realism style and uses a control scheme. Adventure Gamers have not yet published a review of Inca II, at this time the community has not provided a rating for Inca II.