Back in 2012, I promoted voice recognition as perhaps the next big untapped technology in gaming. Naturally, the naysayers scoffed (as naysayers do), believing it to be both impossible and undesirable. Fortunately, a few intrepid developers saw the same potential and have been dabbling with it ever since. Some results, such as Bot Colony, have stumbled over the inevitable implementation issues that have kept that game in a perpetual state of Early Access. At long last, however, it appears that one studio have may have finally cracked the previously insurmountable technical issues.

Not content merely to tackle one big technological advance, the short upcoming cinematic “space opera” STARSHIP COMMANDER: Arcade actually embraces three, adding virtual reality and artificial intelligence (or at least a simulation of such) to the mix as well. Created by a six-person team at Human Interact, whose collective pedigree includes franchises like Mass Effect, Tomb Raider and Saints Row, the game may sound far too ambitious for its own good, but based on what I just sampled firsthand, that future I envisioned six years ago seems to have arrived far more impressively than even I imagined at the time. 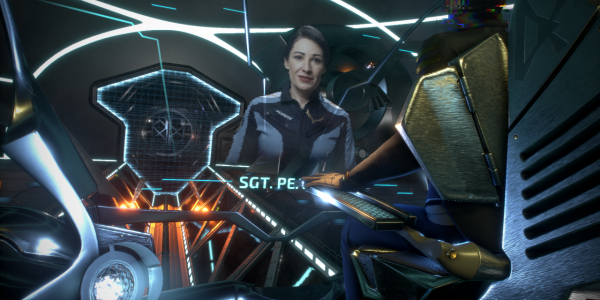 Players assume the first-person role of the starship commander in question, piloting a solo ship called the XR71. As an officer of PEACE, the military branch of planet Earth during the middle of an intergalactic war in the year 2315, you must undertake a secret mission to steal classified data and destroy the source. While the story premise isn't entirely original, what really sets STARSHIP COMMANDER apart is its use of speech as input method. Powered by “Machine Learning” and the Custom Speech Service by Microsoft Cognitive Services, players are able to interact with the game using natural language to ask questions and issue orders. Once considered too unreliable to be functional in games, the developers claim that their "speech recognition is highly accurate, especially in the face of background noise and various speaking styles. The result is immersive, white-knuckle role-playing."

While the latter claim may be a bit overstating, the former is exactly right, at least in my experience. Following a basic microphone check, comfortably seated without a single handheld controller on my Oculus Rift, the game opened with me already in my ship inside a massive, futuristic cargo bay. A hologram of Sgt. Pearson appeared in front of me, informing me of the mission ahead of us (she’s the fighter pilot assigned to escort me) and asking me if I had any questions. Honestly, I just wanted to let ‘er rip, but I decided I’d lob a few softballs at the “A.I.” to see if it could handle them. How fast did my ship go? What kind of weapons does it have? I even tried the totally inappropriate, report-immediately-to-HR-after-the-mission question of whether or not she was married. Turns out, Pearson had answers! Fairly generalized responses in some cases, mind you, but my queries had not only been anticipated, they were – and here’s the big thing – correctly understood just from the sound of my voice. 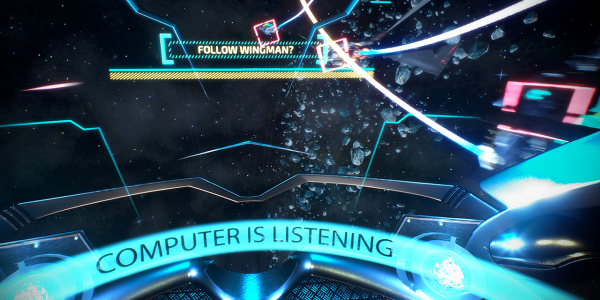 Now, admittedly, I have a clear speaking voice and no distinctive accent (contrary to what every single movie about us tells you, Canadians do NOT sound like Bob and Doug McKenzie), so I probably set a fairly low bar for the voice technology to clear, but nevertheless, it responded quickly and perfectly to my verbal questions and instructions. When I’d had my fill of talking to Pearson, I simply addressed the computer directly (as Star Trek taught us to do long ago) to engage the autopilot and get us on our way.

Once out in space, the VR had a chance to shine, showing off a nice view of Earth from orbit and Pearson showboating in her own spacecraft around me. Movement was gently automated and caused no motion issues for me. Upon nearing our destination, we encountered resistance. I momentarily panicked without a controller in hand, my many years of traditional gaming ingrained into me, until I was informed that the ship would handle the weapons for me. All I needed to do was track incoming enemy ships visually through the crosshair that appeared, an outline circling one when centered in view for a few moments before the foe disappeared in a satisfying fireball. The most strenuous thing required of me was a simple lean to avoid incoming lasers. I encountered little in the way of “puzzles” to solve, though I did need to relay a hatch ID to Pearson before smashing into the closed door. That isn’t the game’s main emphasis, of course, instead presenting a cinematic experience above all else.

It’s funny, looking back now at my original proposal, that I envisioned stepping backwards in other technical areas while advancing voice recognition as a viable method of gaming input. Human Interact was having none of that, pushing forward on multiple fronts simultaneously to create something we’ve really never seen before. It’s still rather superficial for now – more an impressive tech demo than substantial game experience in its own right. But these are no mere gimmicks, they’re first steps in a pioneering field that is only just beginning to be explored, and I came away duly impressed with the progress made already.

The whole experience only took about 15 minutes for a single playthrough, though I could have extended that a bit further by chatting more to my wingwoman before getting underway. The developer’s ultimate goal is to create a full-fledged, choice-driven adventure where every decision has high-stakes consequences. For now, however, they are focusing on this introductory sampler due to launch on SpringboardVR and Private Label VR arcades on December 10th. In the meantime, you can learn more about STARSHIP COMMANDER: Arcade at the official website.

Adventures in Germany and Beyond round table (Part 1) 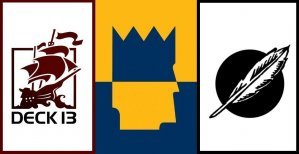 Adventures in Germany and Beyond round table (Part 2)