continue reading below
»   Home  /  Articles  / Features  / A Look at Graphics: Shapes in Composition

A Look at Graphics: Shapes in Composition

The very shapes an artist uses in an image dictate, to a great degree, the mood, feel and ideas that the scene will communicate. We've looked at this already in terms of specific details, but it's no less important to remember that a scene's actual composition is based around shapes, too. As can be expected, these forms provide a great deal of options for an artist, and can be combined or used in various ways to describe a range of concepts or feeling to the viewer. Like the other elements we've discussed previously, this is a powerful tool for the artist when translating a writer's ideas into visuals. 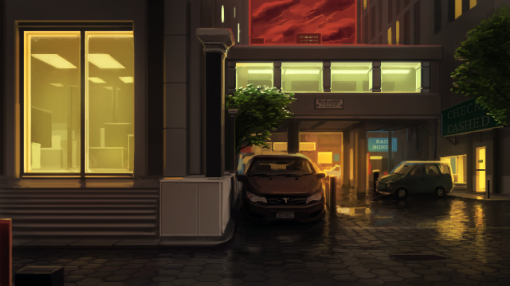 (Click on any image for a complete gallery of larger versions)

Our simplest, most basic shapes are rectangles and squares. These are reminiscent of stable, trustworthy things: buildings, house bricks, pavement. They feel man-made, measured and reliable, so for places of authority – such as this detention centre from Unavowed – they are the perfect basis on which to build a scene. 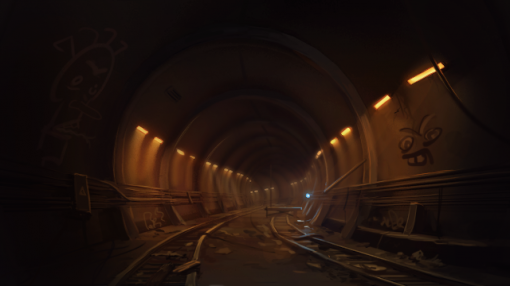 A more dynamic set of shapes are curves and circles. These feel less stable, and slightly more natural, and their tunnel-like appearance is often good at creating the sense of a distinct pathway and a distance to travel, as well as drawing focus into the middle of a scene. Combining a tunnel of circles with a gentle S curve off into the distance such as I’ve done here in Unavowed is an effective way to give that impression of distance – straight lines are always the shortest route between two points, so curving the line helps to build the illusion of depth, and give greater surface areas to show for the walls. 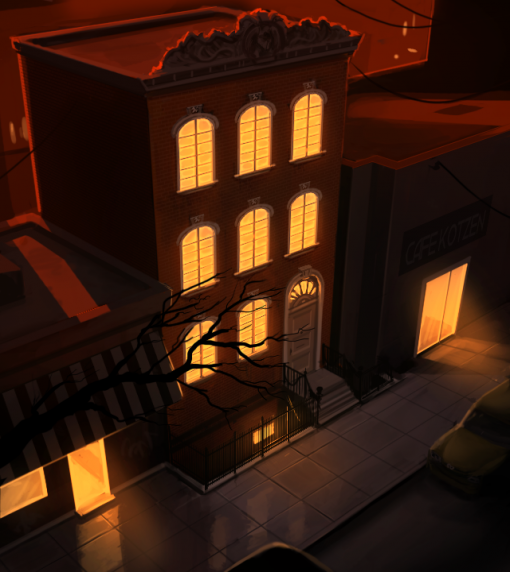 A third aspect of shape we can build around is angles. These initially feel similar to rectangles in that they can feel quite man-made, but the lack of perceived stability adds an element of drama and tension to them. They are perfect for images like this establishing shot from Unavowed, which places the 'camera' high above the street, looking down, adding a slight sense of danger by representing a point of view that isn't standing on stable, solid ground. 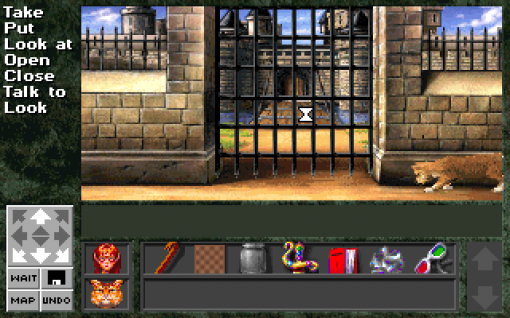 Knowing the nature of our scene is a good way to decide which shapes to build it with. Take this castle wall and gate from Companions of Xanth, for example. Here the structure we're looking at is rigid and unyielding. Placing the viewer's eye at this exact spot makes the forms of both gate and wall feel very solid, and from here it's impossible to see any way to climb over, crawl under, or walk around. These large, solid rectangles represent power, authority, and a hindrance to any progress we could wish to make. 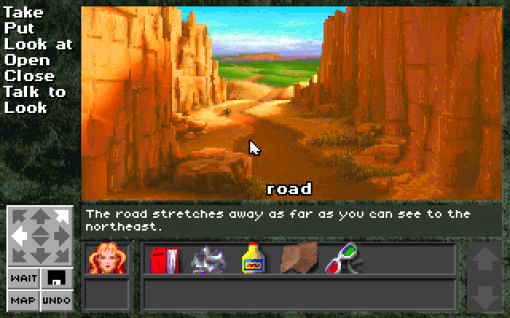 The square shape isn't always limited to man-made objects. Companions of Xanth, again, uses large square canyon walls here to represent a barrier that we cannot pass. Note how straight the edges are – there's no sense that we could climb these cliff faces, and because of that we perceive an impassable and immovable barrier. Compare this with the curving shape of the path that winds through the middle, giving us a sense of a distance that we must travel and a form that feels much less firm and imposing. 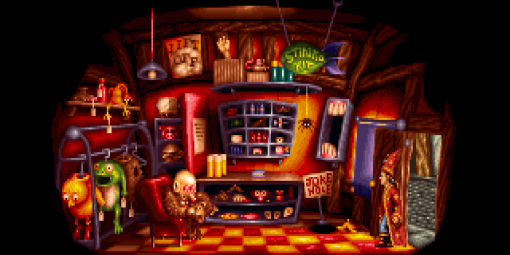 In the same way that squares don't necessarily represent something artificial, circles don't necessarily represent 'organic'. In Simon the Sorcerer 2 we have the interior of a building, easily recognisable as such, but if we take a step back and examine the shape of the composition as a whole, it's quite clear to see it shaped as a big circle. This works well for this kind of scene, a place less authoritative and more lighthearted. It gives a looser, less reliable feel than the hard straight lines of a composition built around squares, and also feels more fun. 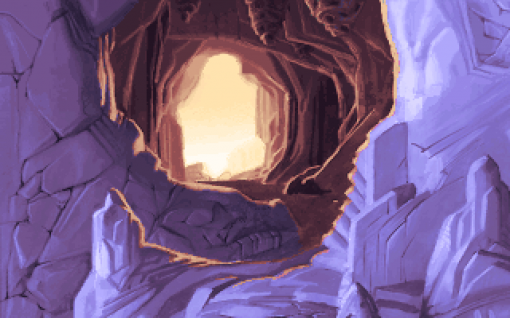 When used in nature, though, circles are great for giving a sense of focus. In this scene from The Dig, our eyes are drawn to the end of the tunnel, and the loose, circular composition acts as a picture frame (something we've discussed before, and comes up many, many times when studying compositions). This sort of scene works in feeling contained and narrow, forcing us down a passage, and is also an excellent way to link between two areas, potentially building suspense for what is to come. 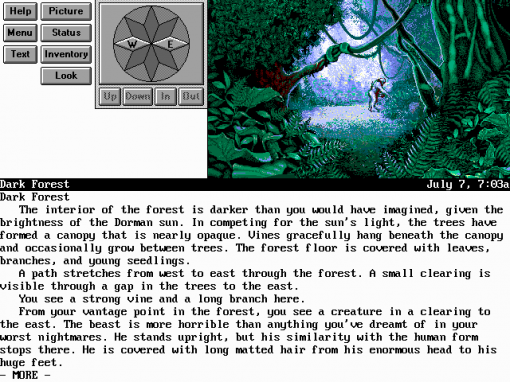 Even the slight suggestion of a circle can help elicit that feeling of narrowness. The rounded opening made by the vegetation in this scene from Frederik Pohl's Gateway creates both a strong sense of dense jungle, and a slight suggestion of being concealed from the creature described in the text. While much less of an actual tunnel in structure, it still has the same effect of enclosing the scene to feel contained, and focuses our eyes on a particular point. 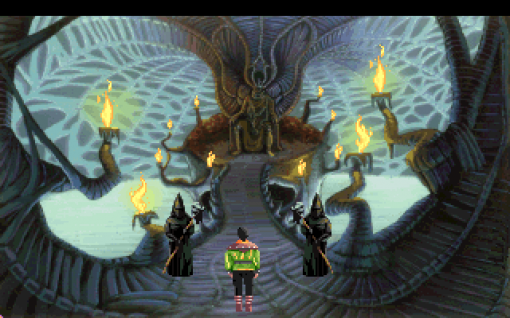 A more complicated series of circles and curves, as shown in this area from King's Quest VI, can combine the two ideas nicely. The curving walls, and particularly the pathway, give a sense of scale, but the way the circles close in on themselves towards the centre of the image still keeps everything feeling contained. It's an interesting juxtaposition between the elements that manages to feel both organic and unnatural, blending both ideas together into a compelling whole. 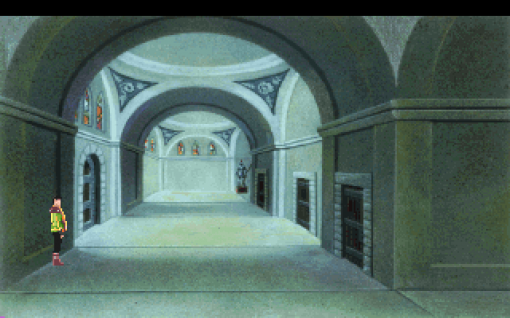 Conversely, when paired with squares, as in this later scene from the same game, circles still provide a sense of containment and bring focus, but now with a much more rigid, official feel. We're still, effectively, looking at tunnels, but here the tunnel feels structured and unnatural. Both combinations are imposing in their own ways; it's the overall 'mood' underlying that feeling that shifts, from oppressively alien to oppressively man-made. 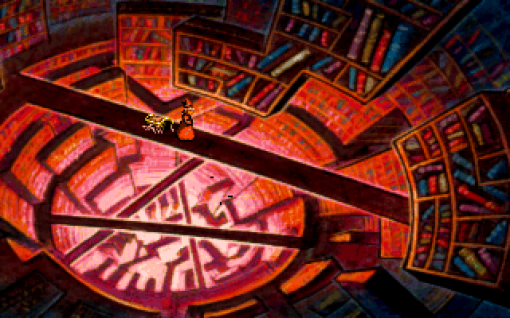 Here's yet another circular composition, this time from Discworld, in which it is paired with angles to give an interesting mix of the two. It still feels manufactured, but in a cryptic way. The high angle of view lends a sense of instability to the scene, and the different angles of the pathways help to throw the balance off too, so we end up with something of a compromise – it still looks man-made, but there's also something definitely otherworldly about this scene. I like to think of these forms as modifiers – depending on the sort of shapes we use within one particular composition, we can achieve a vast range of moods. 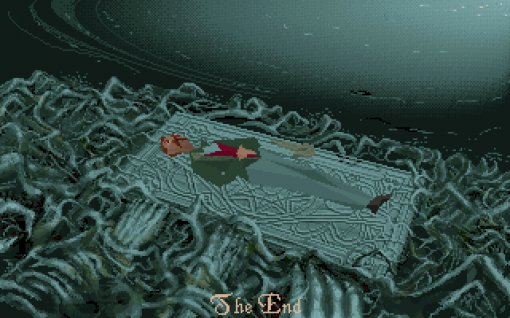 The unsettling nature of angular compositions can be very effective. Alone in the Dark lends a greater level of drama and tension to this death scene with an angled approach. An interesting exercise is to try to envision this same scene, but treating the slab upon which the character lies as a perfect rectangle with edges parallel to the edges of our screen. Suddenly the scene loses some of its impact – the subject matter remains the same, but the representation is more sterile and clinical.

In this manner, fairly normal subject matter can be given a dramatic flavour by being shown at an angle to us. The colours and lighting in this shot from Sam & Max Hit the Road are certainly a big part of what gives it such an eerie, intriguing feel – something we've explored in the past – but so does the way that elements such as trees, clouds and the statue sit at harsh angles. It’s a placement that, compared to the stability of rectangles, feels threatening and abnormal. 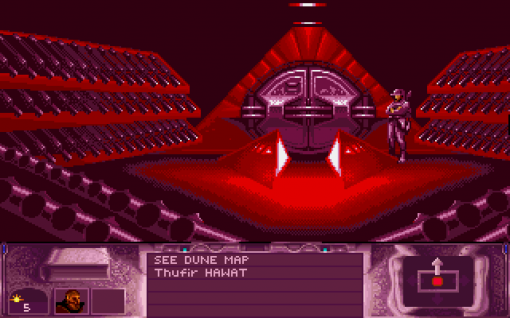 Angles are also useful in that they can combine a threatening, alien impression with rigid straight lines of solid, man-made aspects of a square composition, making it feel more actively menacing. The angular racks of guns in this armoury from Dune could have been shown as squares, but the spiky angles they're given here add to the sense of danger, helping the scene feel more dramatic – a perfect composition for a room full of weapons on an alien planet. This gives us the authoritative sense we might expect from a square composition, but without so much of the stability. 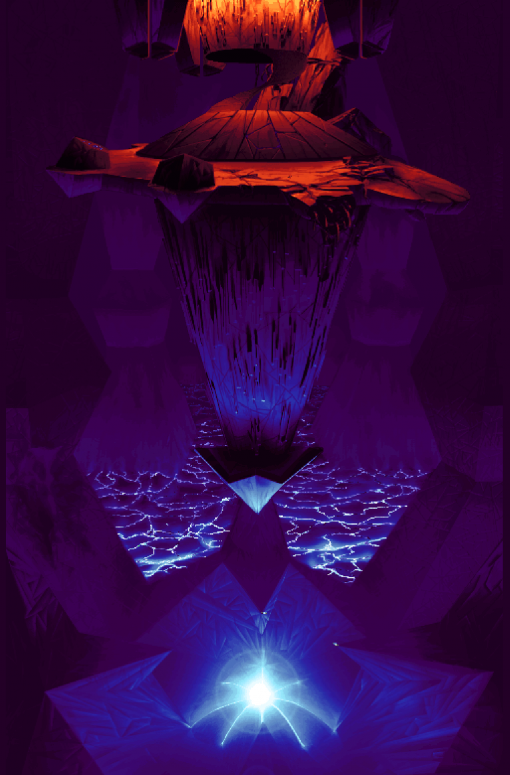 Another example of solid, square lines being used in an angular fashion can be seen here in The Dig, with facets that feel alien, dangerous and dramatic, and in structures that feel manufactured, but not in a human way. This scene is interesting in that the angles seem to get sharper and more prominent as the view pans down, effectively increasing the sense of tension as we perceive the full depth of the space beneath where we can stand. Once more the lighting and colour play a very big role in the mood that's created here, and paired with the forms that make up the scene's basic shapes and structure, this leads to a very powerful overall effect. 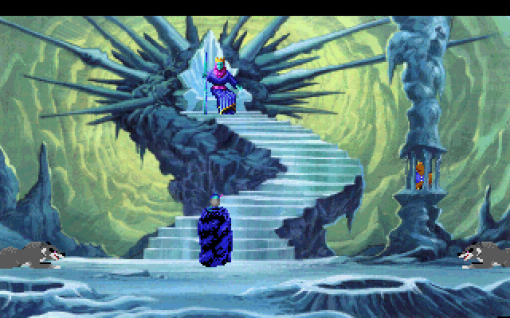 Angled shapes can also be combined with curves and circles in our compositions in wonderful ways. Here we see a curving path leading up to a throne in King's Quest V, but it curves in a harsh, angular way, combining the sense of distance that a curve brings with the danger and drama of angles. We also see a circle of harshly angled spikes behind the throne, presented in a way that draws our attention in towards a specific point and contains the scene. Much like the alien construction of the previous scenes, the setting and materials here are perfect for the composition, with the angular throne matching the idea of shards of ice very well. 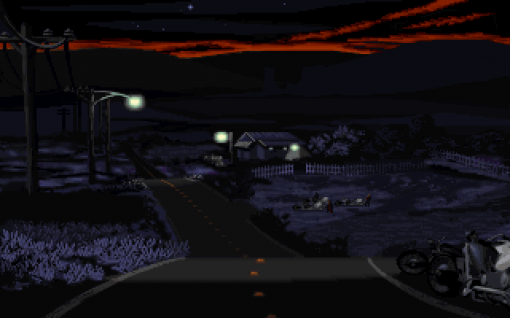 Shapes, then, are about more than just the furniture with which we dress our scenery and the patterns we paper its walls with. They are the building blocks of the underlying structure of our scenes, the very foundations upon which our sets are arranged and designed. I've tried to outline fairly easy-to-follow examples here, but often the shapes of a composition will be much more subtle and harder to spot. Depending on how you look at it, for example, the road from Full Throttle here could be called angular or curved, but mostly, as with many elements in compositions, it's some combination of both without being easily defined. That being said, it's extremely common to use bold, solid compositions that follow these examples, and the more you look for them, the more you'll see how your favourite background artists employ these forms to communicate their ideas back to you. 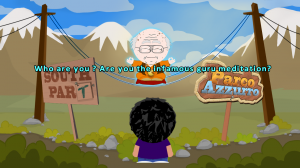