If the name Resonance rings only a vague bell, that’s because the indie adventure was first announced over five years ago before falling largely off the radar. But that didn’t mean xii games’ Vince Wesselman wasn’t busy working on it all that time. The creator of inventive freeware titles Anna and What Linus Bruckman Sees When His Eyes Are Closed kept at his first commercial offering behind the scenes, though progress was slow until Wadjet Eye Games got involved last year. Since then, the project has really taken off, and at long last the intriguing sci-fi thriller is nearing completion. I’ve just played a near-final preview sampler of the upcoming game, and can sum up my reaction in three simple words: When’s the rest?!

Okay, a few more words are probably in order to support my enthusiasm, but I guarantee you that the brilliant opening cutscene alone will have you hooked from the start. News reports of worldwide disasters are flooding in from everywhere: Japan, Germany, Dubai, Australia, each displaying shocking footage like the smouldering Houses of Parliament in London, a giant crater in Israel, and the White House with a massive upper level corner blown completely away. Something has gone very, very wrong on a global level, and though these catastrophic events cannot be explained, they do share a similarity with a recent explosion of a particle accelerator in Avantine City.

So how did this crisis happen? Well, you’ll just have to play the game to find out. Flashing back 60 hours earlier, gameplay picks up with a mathematician named Eddings (“Ed” to his friends) receiving an urgent call from his boss, who’s determined to destroy his Resonance Project data lest it fall into the wrong hands. Reluctant to abandon research meant to do so much good, Ed nevertheless sets off for work, completely unaware of the disaster that awaits. At first it even seems like Ed’s lucky day. Shy and awkward around people, Ed finally gathers the courage to talk to a dark-haired young woman he’s admired from afar on his daily subway trips. Stilted flirtations are rebuffed, but pleasantries and names are eventually exchanged. Maybe there’s hope with the lovely Anna yet. Go Ed! 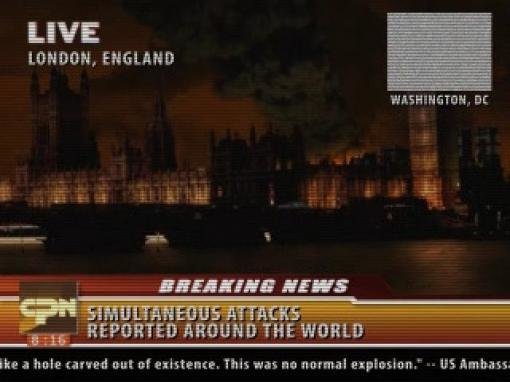 Alas, it’s all downhill from there. After Anna departs, a blackout knocks out the train, leaving Ed to escape through the tunnel. He’ll finally make it to work at the Juno Laboratories, where he finds that calamity has already struck, but this isn’t Ed’s story alone. Resonance also offers the chance to conduct a stakeout as Detective Bennet, who isn’t afraid to bend the rules in the line of duty; investigate a hospital’s mysterious DNA-related secrets as a disguised journalist named Ray; and play as Anna herself, both in adult and childhood form. Their seemingly disconnected stories can be played in any order, which can be a bit confusing at first, but it isn’t long before their fates become entwined in the race for the hidden vault of the Resonance Project, and by then you’ll already feel nicely invested in each character. Anna in particular is a fascinating protagonist, as we experience her childhood terrors first-hand in dreams, and trigger unwelcome memories about her troubled family history.

Memories play a big role in Resonance – not merely as a storytelling device, but an actual gameplay element. For the most part the game plays much like any other traditional point-and-click adventure. Left-clicking uses an item; right-clicking observes it, and hotspots are displayed in a pop-up box at the bottom of the screen (a nice feature that almost, but not quite, makes up for the lack of hotspot highlighter). There’s a place to stash items you acquire, naturally, but the inventory here is three-pronged. Certain events are stored automatically as long-term memories, while any interactive object can be manually selected as a short-term memory. The former provides important background and puzzle clues, while the latter is used to… wait, what was I talking about? Oh, right, short-term memories are used to trigger new dialogue options about the particular item chosen.

The additional inventory layers is a clever idea and a positive addition for the most part, as it removes some of the excessive hand-holding of other games and forces you to think strategically about everything around you. But it isn’t without its faults, as the system can be a little cumbersome in practice. ALL inventory items and both types of memories can be selected for use in conversation, which raises the possibilities significantly. Then multiply that again when controlling more than one character at once. Many options can safely be ignored, but a couple examples during the preview required a very specific item/memory application that didn’t feel intuitive to me. It doesn’t help that only three short-term memories can be stored at once, resulting in a fair bit of legwork at times, or that conversations automatically end whenever you attempt to use an incorrect item or memory. In other words, when you know what to do, the system works great. When it comes time to experiment, the same process can quickly become tedious. 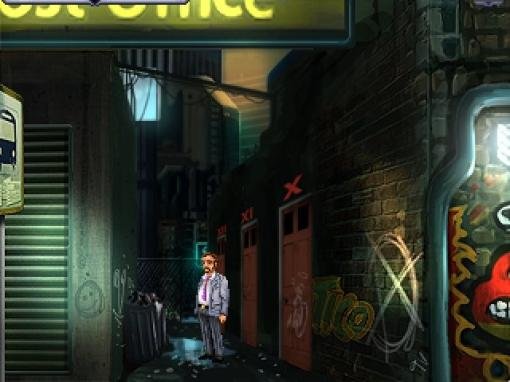 Apart from a few snags, however (and as a work-in-progress, these wrinkles may yet be further ironed out before release), the pace felt brisk as I bounced from character to character, scenario to scenario, each feeling significantly different than the last. One segment involved a lengthy rotating maze with little Anna crawling through vents, though I believe much of that is optional, offering several juicy long-term memories to the more intrepid explorers. I encountered a few combination codes with clues found elsewhere, but for the most part points are scored by successfully overcoming the inventory and dialogue puzzles. Yes, there’s a score counter that tallies up your progress, and subtracts (a lot more) points when you die.

The thought of point totals and dying may conjure up a few personal long-term memories of old-school adventures, but death is a lot more forgiving here. Instead of having to reload, time simply rewinds until just before the fateful sequence, allowing you to try again at the expense of your precious points. I don’t know what happens if your point total falls to zero, but I can’t imagine it’ll be a problem, as there are no fast reflexes required, just thinking your way through generously-timed sequences. The sense of danger is really well done, as I felt a palpable anxiety when an inhuman beast pounded at the door of young Anna’s room, and when a daring fire escape chase was impeded by cheap, broken-down ladder releases. Argh!

These aren’t the only times you’ll feel strongly nostalgic while playing Resonance, as just looking at the game will take you straight back to the mid-‘90s. If you aren’t a fan of pixel art, there’s probably nothing I can say that will change your mind, but for those with even a little appreciation of retro-styled adventures, this game features plenty of impressive artwork with lots of detail and impressive shading. Slum alley walls are strewn with graffiti, fires leave visibly charred remains behind, and multi-coloured skies make for beautiful horizons. Character models have been carefully crafted, each with a unique design, like the chubby, goateed, pink-tied detective whose bald spot is barely concealed by a thin combover. The animation is excellent as well, with great little touches like a subway door stopping just past a waiting Anna on the station platform (isn’t that always the way?). A couple decades ago we’d be calling this a great looking game. In 2012, I’m still calling it a great looking game, albeit one that looks a couple decades old. 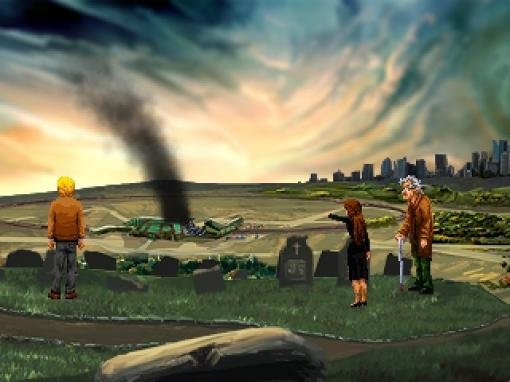 Wadjet Eye is responsible for the voiceovers in Resonance, and although not all the spoken lines were implemented in the preview version, the performances I heard were solid all around. Not unexpectedly, Blackwell and Gemini Rue fans can expect to hear a few familiar voices. You won’t hear voices all the time, however. Conversations will include full speech, but internal commentary will be text-only, a concession that makes sense given the four playable characters and the abundance of observations available. Thankfully, there’s music to fill the void, and it does so wonderfully. Each diverse scenario has its own tune that fits the environment perfectly, whether subtle jazz in Ed’s dingy apartment, canned muzak in a hospital, dramatic orchestral pieces playing over an electrical hazard, or tense piano arrangements as Anna flees for her life. I usually tune out a game’s music, but here it was continually good enough to draw me back in (without ever being noticeably overbearing), providing a superb ambience for the action.

So what is the Resonance Project? Beats me. Can the worldwide disaster foreshadowed at the outset be averted? I dunno. What role does Anna’s traumatic childhood and recurring dreams play in the outcome? No idea. Though I’d put in at least a couple full hours before the preview demo ended, I had the sense that I had only just scratched the surface, offering hope for a substantial adventure to come. Its three-tiered inventory flies in the face of the ultra-streamlining that so many games adopt, and although the concept may bog proceedings down at times, it ensures that you’ll have to actually think your way through the game, not merely click. There may be more questions than answers so far, but as for the all-important matter of “when’s the rest?”, it won’t be long now, as Resonance is due for release sometime next month. It sure looks like one you won’t want to miss, so remember the name when the time comes.

marcd2011
sounds interesting, can't wait to give it a try :) that guy with the walking stick looks oddly familiar..

the gnome
One of the most impressive early previews I too have ever played.

Jackal
I was just trying to motivate you to hurry up, Vince (The Twelve). :D But I guess I can't begrudge you another month to fine tune. I've corrected the article.

after a brisk nap
I played a beta version of more or less the same slice a few months ago, and even though it was without the voices and the intro cut-scene back then, I can wholeheartedly echo Jack's impression: Resonance is shaping up to be an excellent game. Even though the graphic style is quite different, it's otherwise looking very much this year's Gemini Rue. (And Gemini Rue naysayers should know that Resonance is significantly harder and puzzlier, and without any arcade shooting segments at least in the section I played.)

gray pierce
I'm not completely sold on the gameplay but the story and characters sound so good I'm definitely gonna buy this game.

VinceTwelve
Ooh, thanks for the great preview! One correction: the game wont be out THIS month. But almost certainly next month! We'll have a solid release date announcement in the near future (as soon as we pick one)! I'm excited to get this in all your hands!

Peter254
Looks like Wadjet Eye has another sci-fi success on their hands, akin to Gemini Rue. This is encouraging after the lukewarm reception to Da New Guys.

inm8#2
Looks fantastic. Wadjet Eye has a great track record, so I'll be getting this game for sure.
Advertisement
archived preview