Adventure gamers are used to saving the world. Usually it’s from a legendary artifact of untold power, protected for centuries by a secretive cult that only a pretty twenty-something can possibly overcome by hopping the globe from one exotic location after another. It’s great escapist fun, but it’s pure fantasy. So what about actual dangers? Mankind has faced (read: created) some unspeakable horrors throughout history, and if truth is stranger than fiction, surely there are some shocking stories to tell based on real-world events. A Stroke of Fate certainly thinks so. I recently had the chance to play through a portion of Akella’s WWII-era thriller, and right from the outset, its premise is unlike anything I’ve ever encountered:

But wait, it gets a whole lot dicier. You’re not some Wolfenstein super-soldier or an infiltrator for the Inglourious Basterds on assignment, just a conflicted German resident living in Berlin in 1944. Worse still, you’re a high-ranking Nazi officer working for the Gestapo. Oh, and you’ve been assigned to track down and root out known conspirators plotting an assassination attempt against the Führer. In other words, you’re a newly-avowed traitor to his own country, stuck smack dab in the middle of the lion’s den, and charged with crushing the very cause you’ve recently embraced. Now that’s what I call being caught between a Reich and a hard place.

A Stroke of Fate opens with a grim, graphic novel-styled intro detailing Gerhard Mayer’s disenchantment with Hitler, from the blood-chilling atrocities of the concentration camps to the reckless disregard for military casualties to the deteriorating conditions for German citizens at home. In an interesting twist, when actual gameplay begins, players can choose to play in standard mode or a black-and-white “documentary” version (exact same game, just minus the colour). If you want to experiment, you can always switch between them in the settings menu, where you’ll even find a sepia-toned third option.

As a distinguished “Standartenfuhrer” for the SS, Mayer’s first order of business is to get himself presentable for work. That includes selecting the appropriate attire, which gives players the choice between a civilian suit or official hat and heavy topcoat of the Gestapo, as your appearance will affect the way people respond to you. Before you leave home, you’ll want to have a good look around, and there is a LOT to look at. This game has far more non-essential hotspots than most games, many of which provide commentary filled with historical background detail, including a wide variety of posters, case files, and books, not the least of which is Hitler’s own Mein Kampf. There is no hotspot highlighter available, so you’ll need to do a thorough examination of your own in each new location.

Thankfully, a smart cursor shows which objects can be used and which can only be observed, so you can generally pick and choose which items you wish to click on. You’ll still need to pay attention, as there’s nothing to indicate where an inventory item is needed, and on occasion a hotspot will only become interactive when new story details make it relevant. Getting around is very simple, as clicking Mayer anywhere accessible will move him to that spot. There’s no run option (which wouldn’t be very dignified), and Mayer walks very slowly and deliberately, but you can double-click screen exits to automatically transition, or call up a quick travel map at any time. You shouldn’t rely too much on the map, though, as Mayer has his own driver always waiting at his beck and call, and it’s important to talk to him as well. 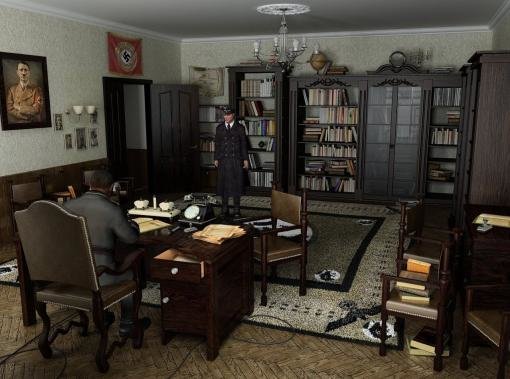 In fact, it’s important to talk to everyone, since even some of the most innocuous-looking characters may have information you need. (Spies wouldn’t wear garish clothes with a big “CLICK ME” sign on their backs, after all.) There are usually one or two key issues to discuss, but conversations typically offer a fair number of secondary topics to explore if you so desire. Each dialogue begins with the requisite “Heil Hitler!” salute, constantly reminding you that you’re a Nazi, as do the many prevalent swastika symbols (real swastikas for a change, in this Russian-made adventure). Whether out of fear, ignorant acceptance, or genuine zealotry, many people will reinforce the anti-Semitic (and anti-just about everyone else) ideals of the Aryan race in your conversations with them. It’s pure propaganda that sets up an interesting counterpoint to the protagonist’s own growing disillusionment.

The section I played let me freely move between Mayer’s home – complete with makeshift darkroom in his bathroom – and the RSHA offices, a couple of German storefronts, and a surveillance apartment. It’s clearly not going to be easy to get close enough to Hitler to kill him, and this being an adventure, it’s bound to be fraught with even more obstacles than usual. Along with official Gestapo business like restoring a fragmented report, taking pictures from an obstructed position and developing them properly, you’ll also find yourself doing favours for colleagues to gain their cooperation. Kind of an “I don’t shoot your back, you don’t shoot mine” philosophy at work. Most of the puzzles I encountered were inventory-based, including a few item combinations, though developing photos adds some easy timed conditions. One particularly clever sequence had me reconstruct a memory sequence to locate a missing key by retracing my steps. It’s useful to check your journal at times, as it lists your current objective and occasionally provides a clue for how to proceed. This is important, as there isn’t always sufficient in-game feedback to guide you in the right direction.

A particularly welcome feature of A Stroke of Fate is the ability to solve puzzles in different ways. Most challenges have only one solution, but sometimes you can accomplish a task with a different approach. Steam blocking your camera view? Either filter it out optically or fix the darn leak. That little old landlady won’t cooperate about a free room? Appeal to her through compassion or bully her like the Nazi bigwig you are. There are even consequences to your actions, though nothing that affects the game in any significant way, at least to this point. Along with the multiple solutions, I discovered one entirely optional sequence that has a much greater impact on the storyline. It doesn’t affect progress in any way, but I missed it the first time around and was shocked at how much it added to my understanding when I went back to tie up the loose ends I knew I’d left undone. By decoding a telegram through an unusual word-scramble minigame, I was able to follow a trail of spies I’d never have known existed otherwise. 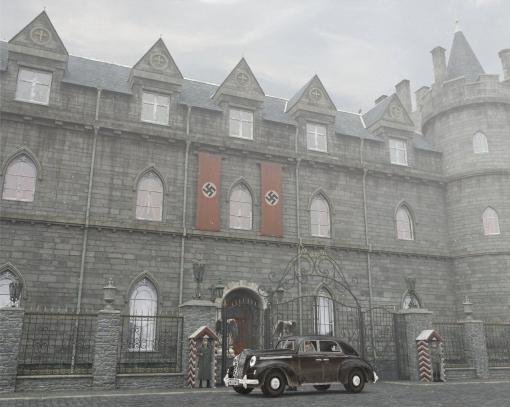 While the scenery was somewhat limited in this preview sampler, the game delivers a solid visual presentation. Pre-rendered backgrounds are reasonably detailed, with cobblestoned streets, hardwood floors, and stuccoed walls adding a variety of textures. Characters are rarely shown close up in-game, but conversations trigger a dialogue box with a nice selection of portraits. With most of the early locations set indoors, there was little ambient animation necessary, but any time I stepped outside I saw imposing grey clouds rolling in, leaves sweeping in the breeze, or cars motoring by. Certain animations are still a bit hitchy, especially involving Mayer’s car, but there’s still time to resolve those before release.

Surprisingly, A Stroke of Fate is already fully voice-acted, and the performances I heard were generally adequate. A few stilted lines or mispronunciations highlighted the fact that English was not the original language of this game, but there’s nothing here that will disrupt your enjoyment. The developers largely chose to forsake any attempt at a local dialect, particularly from Mayer, who delivers a rather calm, measured performance in a fairly generic American (non-)accent, while many others sound more British than German. Sound effects are sparse but effective, especially a haunting air raid siren that nicely ramps up the tension at one point. A piano-dominated musical soundtrack plays sporadically throughout the game, but often at such a low volume that you may be unaware it’s even there, which works just fine as atmospheric background.

There was blood on my hands (figuratively) and on the walls (literally) before I was done, and the demo ended just as the action was switching to the heavily-fortified Adlerhorst Castle, which Mayer is assigned to investigate for its defensive capabilities. It will be fascinating to see where the story goes from there. After all, the demise of Hitler is well-known historical fact, so the writers will need to take judicious liberties with the record books to adapt it to their purposes. The premise has certainly caught my attention, however, as a welcome break from the tired themes and clichés the genre usually has to offer. When we’ll see more has yet to be determined, as Russian games often have trouble reaching English language markets. Here’s hoping that A Stroke of Fate will meet a better fate of its own, but for now we can only wait on its march towards release, one goose step at a time. 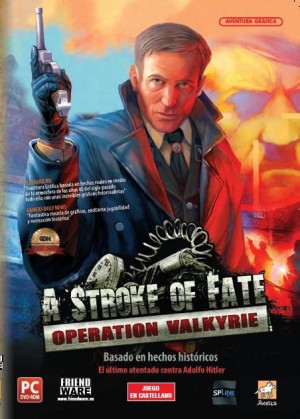 All A Stroke of Fate games (series/episodes)
» Discover other games

Sivers
Finally the game is available on Steam.

Jackal
No one knows, including the publisher. Akella's games (and often Russian games in general) always seem to have trouble finding international distributors (and they seem reluctant to use digital distrubution as an alternative).

Adventurequests
When the game will be release in English?

magicarb
The game has been released in various parts of the world, including in Spanish and Russian. Perhaps in the Russian version, your character *is* a Russian spy. Awaiting the English soundtrack release.

dekaneas297
So the game is ready in the English language? We are just waiting for a publisher? I 've been waiting for two years for this game...

Jackal
I don't know what version you were playing, but the one I played is exactly how I described it.

St_Martyne
Er.. you're not "just a conflicted German resident living in Berlin in 1944. Worse still, youâ€™re a high-ranking Nazi officer working for the Gestapo". You're a Russian spy. Otherwise, great preview. The game is quite good, actually.

diego
Thanx, i was wondering what's going on with this title, along with other Akella's game like The Bad, Ugly and the Sober. Interestingly, there is already sequel to this game and still not an international release for the original.
Advertisement
archived preview