The Hardy Boys: Treasure on the Tracks hands-on archived preview

The Hardy Boys must have been getting impatient these last few years, sitting idly on the sidelines while their popular female counterpart Nancy Drew got the gaming spotlight, particularly from Her Interactive. But with their foot now squarely in the interactive door, the boys seem intent on making up for lost time. We’ve already seen one PC adventure (The Hidden Theft) and one casual game (The Perfect Crime), and in a few weeks Her Interactive will be featuring the sibling teen detectives themselves in their first Nintendo DS adventure, Treasure on the Tracks. I recently had the chance to ride the rails for a sneak preview so I can offer up a few nuggets of information about what to expect on the journey ahead.

Perhaps the first thing that should be noted is that Treasure on the Tracks skews a little younger than the longrunning Nancy Drew PC games. It’s overstating to say it’s “for kids”, but clearly its demographic is similar to that of the longrunning book series. Having said that, anyone who’s read any of the novels knows there’s something of a timeless, even ageless charm to them, which is probably why they’ve been so successful over the years. The same can probably be said of the game. So long as there’s still a recognizable child in you, you’ll be all right. Just don’t expect any significant degree of challenge. 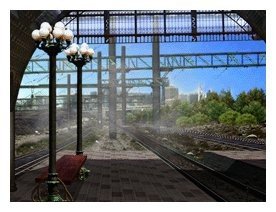 The adventure sees Frank and Joe Hardy aboard the Royal Express, en route from Paris to St. Petersburg with stops at such places as a palace in Vienna, an art gallery in Prague, and a plaza in Warsaw along the way. They’re travelling with a select group of others chosen for the latest attempt to solve the decades-old mystery of the lost Romanov treasure, reportedly connected to a mysterious “golden train”. Clues to the missing valuables are believed to be hidden in a series of paintings left behind by the Tsar in honour of his children when his regime collapsed. (Yes, the current proliferation of art-themed conspiracies has reached the Hardy Boys as well.)

And so it’s up to players to crack the secrets before the competition, all of whom seem to have something to hide. There’s an obnoxious art scholar, a clutzy but lovely serving girl, a British historian, and the German Baron von What’s-His-Face (Joe can never remember, and I can’t either). There’s also a man in a fez who appears at key moments, bringing danger and destruction whenever he appears. The brothers themselves occasionally interject with their usual banter; the older, more responsible Frank generally trying to keep the younger, precocious Joe in check, though you rarely see either one outside the few comic-style cutscenes. Oh, and there’s a mystery girl who contacts the boys by phone, knows about their efforts, and will do what she can to assist them from afar. A master of disguise, Samantha, or Dawn, or Celeste (depending on who asks) is even a playable character at times. Who is she? Well, that’s just another mystery.

Treasure on the Tracks plays out in a fairly formulaic way: while on the train you’ll snoop around, talk to other passengers, and look for clues to the next painting, collecting related items as you go, whether it’s code fragments, gears, or train pieces for the wonderful diorama on display. Arriving at each station, you’ll have to solve a grid-based map puzzle to highlight where to go, then usually locate more pieces of torn documents you’ll need and assemble them for access to the next painting on the list. The paintings themselves are quite simple, merely requiring a sharp eye to identify similar objects, leaving Frank and Joe to note the relevant clue when you're done.

Along with the more puzzle-like adventure elements are a handful of minigames. Some are lightly timed elements, like defusing a bomb by interpreting the proper instructions, while others demand a reasonable amount of hand-eye coordination, like quick-tapping all the loose items in a sleeping car before the guard catches you – or winning an on-screen button-mashing exercise if he does. There are quite a few others as well, though none that should prove insurmountable. Still, if the less dexterous among you are buying the game (cough)for your kids(cough), better make sure you have one around in case you need them. 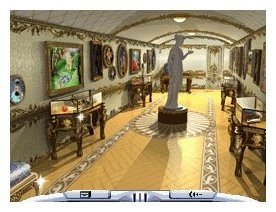 In general, Treasure on the Tracks makes good use of the DS features. Several of the minigames include touch-sensitive tasks, and there’s a handy notepad that you can scribble on, though there may not be much call for the latter. Otherwise, the point-and-click control scheme works much like you’d expect. The game is presented in a slideshow-style first-person view, and clicking on interactive items activates them for use or closer examination, while directional arrows will move you to the next destination. Surprisingly, the exit cursors are not readily visible, and the game’s tutorial encourages you to drag the stylus around the screen to find them. It’s not difficult to know where to look for one, but this seems a rather fundamental aspect to withhold. At the very least, a button press to highlight might have worked better.

All the activity takes place on the bottom screen, with dialogues appearing on the top. When not in use, the top screen acts simply as a higher extension of the bottom. Generally this results in a fairly irrelevant view, but it works on the train, as the top screen gently rocks and sways to simulate the train’s motion, while the bottom remains still for you to interact with it. It’s a clever touch. The screens themselves are simply but nicely designed, but it’s important to remember to check your surroundings both coming and going, as reverse angles can show details the first view might not.

Players will also want to check the PDA occasionally, as it contains a task list, and at least a couple times it provides the only real indication of what to do next. You’ll do some reading elsewhere as well, with no voice acting available, and a smattering of books, news, and notes to fill in additional details. Some of the information is more educational than anything, offering insight into the places you visit and background about Rasputin, the Romanovs, and events of the period. This is never overdone, so the (cough)kids(cough) might just learn some fun facts while they play.

Overall, the game likely won’t appeal far beyond its core audience, but any fan of the books should find the first Hardy Boys handheld adventure to offer much the same light adventuring fare. Just remember that it’s a little lower on difficulty scale than Her Interactive’s Nancy Drew detective series, so plan your expectations accordingly. Treasure on the Tracks will be available early next month, and if there’s anyone in the household who knows that ATAC stands for, you’d do well to dig your family up a copy.