#1: Day of the Tentacle (CD-ROM version)

This Top 20 list has been through multiple drafts and revisions over the last four years, as I try to somehow come up with the perfect list, or at least the most fair. Through all the revisions, as you can imagine, games have been shuffled endlessly, constantly switching positions, being knocked off the list and back on repeatedly. But through every revision, from the original all the way to this 2003 edition, the #1 slot has never changed. It's never been a question for me. It's never been any sort of a dilemma. Day of the Tentacle, not a doubt in my mind, is the ultimate adventure game, the greatest ever. 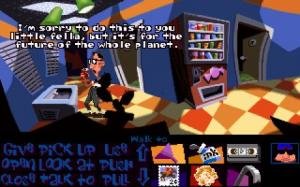 Last week I said the Top 6 were virtually deadlocked with each other. That was actually a bit of a lie; #6-#2 were deadlocked. DOTT exists on its own level. I referred to those five games as "virtually flawless" but for this game, I drop the virtually part of it. The 1993 CD "talkie" version of Day of the Tentacle is a perfectly flawless adventure, the rarest of rare games, that which did nothing wrong. Nothing. There is no weakness in this game, no sieve. Stop waiting for the "but" because it won't come. This is the perfect adventure game, the one adventure that brought every aspect of great adventures together and created such an enjoyable masterpiece, it almost seems to transcend the level of computer games.

It's so great, from bottom to top, that it makes a case in every single possible area for being the greatest. The gorgeous cartoon graphics and the dazzlingly creative animation never stop amazing for the entire game. Ten years later, the opening animation of the bird flying over the mansion still looks fantastic. The musical score is perfectly suited, the voice acting is top-notch and captures the humorous essence of all the characters more accurately than most CD-ROM games could ever hope for. The jokes quite simply never miss, and hit right square in the belly most of the time. I don't know if I've ever laughed harder at a game than when the dazed and confused Laverne, the main female character, was travelling through a swirling time vortex and said, "This must be that Woodstock place Mom and Dad are always talking about." If you don't find that funny, you either haven't heard it in the game, or...well, I don't know. That kind of humor is just a standard in a brilliant script easily on par with any Monkey Island or Sam & Max, if not surpassing them both. 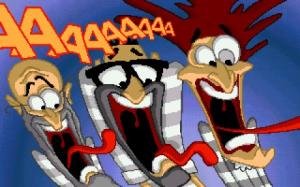 And of course, adventure games are all about characters and plot. I've commented earlier that I am a sucker for time travel, and no adventure game has ever utilized the concept better than this. The game begins with the funniest introduction sequence ever as Bernard, the nerd from the original Maniac Mansion receives a message (via hamster courier) from his good friend Green Tentacle, asking for assistance in dealing with the Purple Tentacle, who has drank some of Dr. Fred's radioactive sludge and become mad with power (he's grown arms too). Bernard, in heroic glory, stares out his window and declares that he must go "back to the mansion!" in another incredibly funny pop culture reference. What follows is the greatest opening credits sequence ever, as Bernard and friends Hoagie and Laverne jump in the jalopy and proceed to burn tracks to the mansion, driving through barns and around sharp curves. There's certainly no other game that I watch the intro to every time I boot it up, not even King's Quest VI or Full Throttle, but I laugh every single time at the sounds of our heroes driving chickens out of their home.

Through a series of events too amusing to really do justice, our three heroes end up in different eras. Hoagie finds himself dropped right into the site of the Constitutional Convention, alongside an arrogant George Washington, a snivelly John Hancock, a snooty Thomas Jefferson, and an insane Ben Franklin. Laverne is vaulted two hundred years into the future, where she unfortunately is suspended from a cherry tree. How do you get her down? Simple. Have Hoagie talk George Washington into chopping down the tree, probably my favorite adventure game puzzle of all-time and just another of hundreds of examples of this game's sparkling irreverence and brilliance. The puzzles are innovative and brilliant throughout, challenging but never once becoming frustrating, and always making clever use of the time travel ideas. 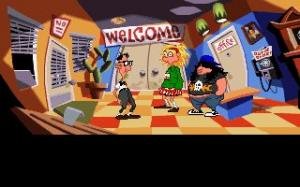 Words fail me; the words have not been invented for Day of the Tentacle. I've exhausted my meager vocabulary. All I can say is that from the moment I was enchanted by it nine years ago, the joy has never been lost. Replaying this game last month gave me the same magical feeling I had the first time, and reminded me why I love adventure games so much. In every aspect, every area, this game is one of the greatest. The greatest introduction, the greatest characters, the most innovative graphics, the greatest voice acting (certainly the best in a comedy), the greatest humor, the greatest story, by far the most creative and ingenious puzzles, and the greatest ending, a final touch that left me laughing for what felt like an hour. Laughing was all I could do during this game when I wasn't admiring the beautiful graphics.

There isn't a greater game, adventure or otherwise, in existence than Day of the Tentacle; I believe that with all of my heart, and if you have not experienced the game, you don't understand the heights that an adventure game can attain. Strong words? Absolutely. That's how strongly I feel about this game.

It's been fun counting down and reliving the great games, but amongst a magnificent array of great adventures, there is one that sits on the throne, head and shoulders above every other adventure, and seems to snicker as others try to reach its peak. None ever will. Day of the Tentacle is the #1 adventure game of all-time.

Matan
MoonBird, that never happened to me, in any LucasArts game - perhaps it's a specific problem for your system? Are you using scummvm?

wielandsmith
While I enjoyed this, I wouldn't call it that memorable. That said, number 1 is always going to be a point of contention.

MoonBird
Flawless? I wouldn't think so. The stupid dialogue-lines change incorrectly with voice-acting. (same problem than with Indiana Jones and Sam & Max for example) Simply that will reduce the game to 4 stars. It's really annoying.

ShadeJackrabbit
I agree with you completely here. I must've played through this game 30 times, but it never gets old. I was lucky enough to pick it up at a garage sale for about fifty cents (canadian) about 5 years ago. A real classic.

RockNFknRoll
whoa. good game, but geez...certainly not the best. I guess you can't argue for someone's personal nostalgia though
Advertisement
feature