Unlike some adventures, The Abbey wasn't talked about much before the Games Convention started. Other than a Spanish preview early in 2006, there had only been the little information gleaned from the 2006 GC to go on. And there, Crimson Cow didn't show anything of the game, sending the press home with a few cryptic statements about their plans. But this year they've finally unveiled the game to the press, and brought not only a playable sample but also Emilio de Paz, head of the Spanish developer Alcachofa Soft.

In the beginning, Emilio created the intro

The last time we saw Alcachofa Soft in the German adventure market was with Fred & Jeff: A Movie Adventure -- a nice comic diversion which came with an interesting multiplayer gimmick, but otherwise nothing particularly spectacular. When Crimson Cow's Georg Hach showed us the intro to The Abbey, though, it soon became clear that the developer has come a long way since then.

The game tells the story of Leonardo, a former royal advisor. The Vatican sends him and his assistant Bruno off to a remote monastery, where things aren't as peaceful as one would expect from such a place. In the intro, we see them riding through some rough terrain on a stormy night. On the way, they already get their first taste of what's to come: a mysterious figure in monk's robes rolls a large rock down a cliff, and Leonardo can only barely get his companion out of the stone's way.

The dramatic tension is underlined by the opulent soundtrack performed by the City of Prague Philharmonic Orchestra. The trailer reveals some of this terrific intro music, in which the orchestra is accompanied by a powerful choir. Emilio de Paz, who is composing the music himself, will use the 50-person orchestra for the entire 70-minute soundtrack. A CD will follow at some point, and a 15-minute sampler was already being handed out to the press at the Convention.

And Emilio said: It will look nice! 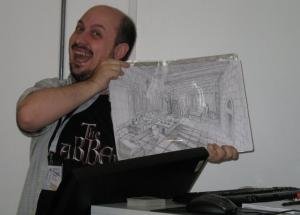 The opening isn't pre-rendered, but rather uses the same technology as the rest of the game. The game world consists mostly of hand-drawn, comic-style backgrounds, with real-time rendered 3D characters walking through them. The intro manages to be dynamic anyway, because it successfully combines and switches between many such background drawings, available because of all the hard work the artists from Alcachofa did to make such a variety of camera angles available in the first place.

This method continues to be used in the game proper. In order to maintain as cinematic a look as possible, specific backgrounds have been drawn for situations like dialogs, allowing close-ups to be used. Sometimes a new viewpoint is used even when merely picking up an item. This brings the total count up to some 1000 background images for 60 rooms. A zooming technique is also put to good use to focus on specific parts of the screen.

The game supports any high resolution, scaling the backgrounds and characters as needed. Widescreen resolutions are also supported. In such cases, the inventory fills the extra space at the side. 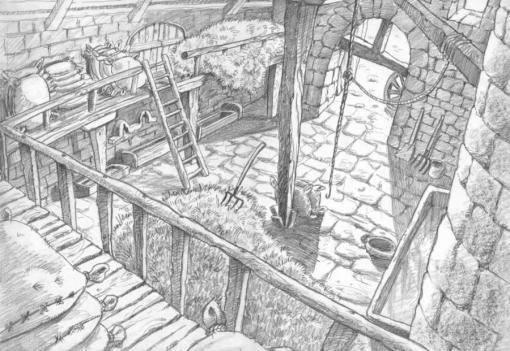 And Emilio created Man in his image

While the hand-drawn part of The Abbey looks great, the 3D part is two-sided. The characters are accomplished very well, with their high polygon count making them look well rounded (literally), and characteristic facial lines resulting in convincing expressions. The lip synchronization couldn't be judged yet, as the convention version didn't have any voices. The real-time 3D characters blended into the hand-drawn backgrounds incredibly well, owing to what's probably the best cel shading the adventure genre has seen so far. This makes the characters look much like in Runaway, where Pendulo Studios used pre-rendered sprites.

However, the use of 3D isn't especially appealing in other areas. The sudden appearance of entirely straight-lined 3D buildings in otherwise fully hand-drawn backgrounds doesn't really fit. One example of this is the abbey, as seen in the tracking shot at the end of the GC trailer. But since the outer areas were the ones most notably incomplete at the time, it is not yet clear to what effect this technique will be used. 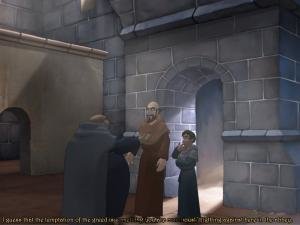 It's been hard until recently to determine where The Abbey rests between thriller and comedy. Early screenshots seemed to indicate a gag parade like Fred & Jeff, but Alcachofa Soft and Crimson Cow have deliberately moved away from that direction. The characters have gone through especially sweeping changes over the past year, so that the game world now has believable characters rather than grossly exaggerated caricatures. Their features still look a bit exaggerated, but they look serious enough to support a suspenseful plot.

And The Abbey will indeed be a serious thriller, following the tradition of Umberto Eco’s The Name of the Rose. Besides the foiled attack in the intro, there are strange incidents in the abbey as well, culminating in murder. Leonardo investigates them just like Eco's William of Baskerville, accompanied by his assistant Bruno.

But the game isn't dead serious, either. There is a lot of humor to be had in the interplay between the razor-sharp Leonardo, who always has another sarcastic comment up his sleeve, and his dimwitted assistant. Even now, it's still too early to tell exactly how this balancing act between intelligent comedy and exciting thriller is going to work out.

Go forth and get finished

The Abbey is more than just another Alcachofa game. Emilio de Paz came up with the initial ideas 10 years ago and kept them in the back of his head ever since. This all-rounder is not just the project leader and lead designer but also pre-draws all the locations, composes all the music, and finds the time to be a professional magician in between. He enthralled the journalists at the Games Convention not only with his natural charm but also with the deck of cards that never left his side.

But while de Paz is definitely the ace up Crimson Cow's sleeve, the hand they're holding isn't half bad either. The Abbey looks very good, sounds outstanding, and if the mix between suspense and humor works out, this game will be in a whole different league than Fred & Jeff. If anything, the fact that the publisher isn't unduly pressuring its developer and giving them until 2008 is a good sign.

This article was originally published on the German website Adventure-Treff. It has been translated and reprinted here with permission. Translation provided by Harald Bastiaanse.

Please let this come out for the Wii.

Have a look at this news item as well, which contains a link to a trailer for The Abbey.

Somehow I’ve heard nothing about this game at all up until now and it’s definately captured my attention. The little we’ve heard of the story sounds intriguing and the screenshots look different and creative. It looks like there’s a lot of potential here and I really hope the game lives up to it. Nice preview, Jan.