Ever since April, when The Games Company began to release information about Everlight, the new adventure from Silver Style Entertainment, there's been more talk about its similarities to Simon the Sorcerer 4 than the game itself. Recently we were invited to the headquarters of the publisher in Berlin so that we could form our own opinions about an early version of the game. 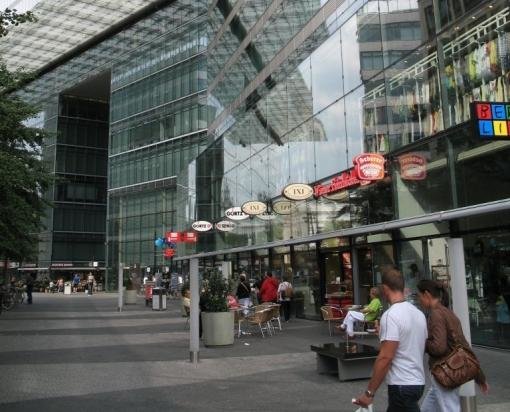 Though missing the introduction and menus at this stage, we were able to play through the beginning of Everlight. The segment opens with our curious and inquisitive hero, Melvin, entering a shop full of candles in all conceivable variations. The salesman speaks of candle-based magic, and points out that he also sells magical candles. After a short time, it becomes clear that Melvin is in possession of the rare talent allowing him to learn this particular art.

For that very purpose, Melvin is sent by the salesman into the fantasy village of Tallen. At first it's not clear if this village exists in a vastly distant place, in another dimension of magic, or just in Melvin's imagination. By journeying through a magical wormhole, Melvin is dumped into the main plaza of the small town, and is promptly stuck with the cheeky fairy Fenny as a spiritual guide. She's invisible to the other inhabitants of Tallen -- unless she chooses to make herself appear -- and she fulfills several purposes in the game. At times she'll tell Melvin when he's about to try something stupid or give him tips, and on other occasions she can be used as part of the solution to puzzles.

As he begins to explore the town, Melvin discovers that Tallen has been cursed. Each inhabitant's personality turns into its polar opposite during the night, only to revert back to normal in the morning without the affected individuals noticing the change. After sunset, for example, the chronically bankrupt and thrifty blacksmith spends his last pennies for beer and gambling, the otherwise overly correct members of the city council play pranks on their fellow citizens, and the spinster Daphne turns into a nymphomaniac with handcuffs tied to her bed, forcing a leather harness onto her fluffy teddy.

Melvin can -- and must -- use this duality to his advantage. To aid in this, it's possible to switch between day and night at the press of a button. Each location exists as a light and dark version of itself, different not only in lighting, but in many small details. The villagers are situated elsewhere, and their homes are altered to reflect their contrasting characteristics. 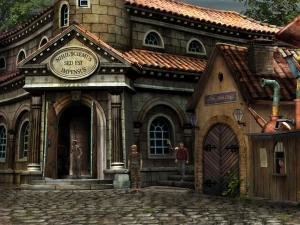 These discrepancies provide the central component in the puzzle design. To illustrate, The Games Company presented a puzzle in which Melvin has to acquire a bottle of magic ink from a local shop, at first lacking the money to do so. He can only afford the purchase after beating the blacksmith in gambling at night. To have the money to lose, however, the smith first has to earn it himself, so Melvin must help him by playing a prank, but for that he needs an item that must also be acquired during the nighttime. After several time switches, then, he'll finally be able to pay for the item with the store owner's own money.

The concept reminds us somewhat of the double world from the fifth episode of Sam & Max: Season One. Puzzles like this one, combining together the two layers of gameplay, are apparently laced throughout the whole game. If Silver Style integrates the feature consistently and creatively, then Everlight should pose several interesting quests -- the oddball method of acquiring the ink made us want more, at least.

A help system with three levels is planned, which can give increasingly clear tips to each puzzle. Another addition is a points system that reflects how the puzzles have been solved. Even optional puzzles that aren't needed to complete the game are rewarded this way.

Silver Style approaches gameplay according to the motto 'never change a working system'. In keeping with that formula, Everlight offers a classic point-and-click interface with familiar controls, multiple-choice dialogues, and an intuitive inventory, while virtual deaths and dead ends are taboo. Innovation will be intentionally restricted to puzzle design. 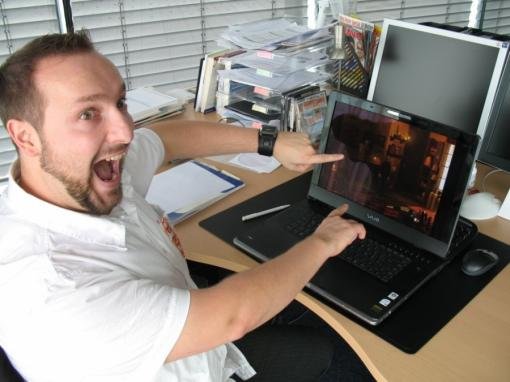 The pre-rendered backgrounds are certainly reminiscent of the scenes in the latest Simon the Sorcerer, but tend to be less exaggeratedly comic-like. Nevertheless, the visual design of Everlight cannot escape its developer origins. The game engine was taken from Silver Style's previous game and tinkered with somewhat, as new particle and light effects will add further pizzazz to the images. The version we got to see contained very few animations, but we've been assured plenty work is being done in that regard.

The Games Company also promised lip-synched mouth movements, as well as plenty of emotive facial expressions. The developers are also working on a system in which characters will turn to face each other during dialogue, but this was not yet implemented either. Such a feature is important, since Everlight makes extensive use of character close-ups during conversation, intended to invoke a more film-like game experience.

There is no denying a certain resemblance to the developer's own Simon the Sorcerer 4, with its similar graphics, magic-laced fantasy world and biting humour, but Everlight deserves the chance to stand alone with its own distinct identity. The day-night switches add an interesting spin to the game design, and the story looks to take the game in an entirely new direction that certainly piqued our curiosity.

This article was originally published on the German website Adventure-Treff. It has been translated and reprinted here with permission. Translation provided by Neike Taika-Tessaro.

Melanie68
I'm looking forward to the setting of this game and the idea of the light and dark settings (with the different character personalities) is intriguing. Also, hurrah for an in-game hints system! :)
Advertisement
archived preview