Emerging almost out of thin air not long ago, rather like its subject matter, Ghost in the Sheet is the result of a collaboration of independent Czech creators Jan Kavan and Lukas Medek, who have come together as Cardboard Box Entertainment (CBE, for short) to produce their debut adventure in less than a year. Like most people, I knew very little of the game until lately, but I've since had the chance to play through a beta version of this promising first-person adventure with an offbeat, supernatural story.

The website for Ghost in the Sheet asks "Have you ever wanted to know what happens to you after you die?" Well, right away, this game dispels the theory that death is a safe haven from micro-managers and overbearing bosses. The game jumps immediately into a stylish, comic-style cutscene between a ghost and his afterworld superior. The nameless ghost, a recently deceased mortal, has just been assigned the rank of apprentice in a paranormal investigation agency that examines strange occurrences in the mortal world (sort of the opposite of Ghostbusters). He is rather unceremoniously clothed in a drab sheet which acts as a physical intermediary between his spirit and the mortal world.

His first assignment is to investigate the fate of the workers in a factory known as Sector Omega. Without doubt, something strange is going on there, and the plot surrounds a mysterious fire that destroyed part of the factory floor, and the presence of a monster that may be lurking within its walls. 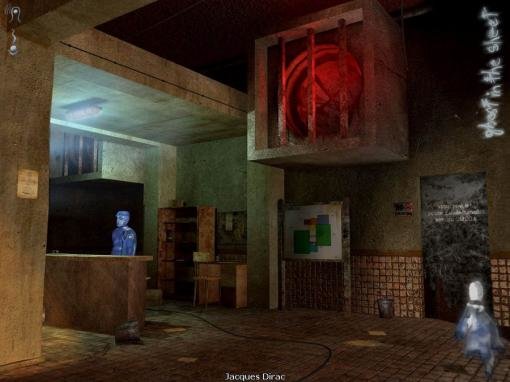 It is here where players jump into the ghost's shoes... or whatever the equivalent of a ghost with no feet would be. After a brief tutorial that describes the familiar point-and-click basics, you'll arrive at Sector Omega and the real adventure begins. GITS is a non-linear game mostly devoted to exploring the factory floors and the adjacent rooms. There are many puzzling aspects of this factory, including the presence of hundreds of metal buckets strewn throughout the rooms in a seemingly random pattern, and the vandalization of the factory by workers: throughout the game, a particular word is scrawled on walls, suggesting the signature of a sinister presence.

In the beginning stages of the game, the player is introduced to lots of strange numbers and letters scribbled on walls and random sheets of paper, many of which will be used later. One of the objects that I found to be rather useful was a diary left by one of the factory workers, which players will discover in one of the first few rooms of the game. Although a bit corny, the diary contains a solid narrative of events prefacing the fire, and, more importantly, establishes the precarious relationship between the characters, many of which the gamer will later meet.

Over the course of the investigation, our ghostly protagonist interacts with several of the employees that worked in the factory in order to discover their fate. They are a myriad bunch: an old fireman, a woman drawn as a shadow perpetually singing in the shower, and a loyal, if not slightly uptight, factory porter, to name just a few.

Ghost in the Sheet does not rely much on the use of the accumulation of objects. (Alas, a white sheet does not have the pockets necessary to do so.) However, the ghost does have the chance to learn a number of skills of the seasoned poltergeist in order to manipulate objects around him. Telekinesis and the ability to create sounds and light are some of the skills at his disposal to aid in his investigation (and strike fear into the hearts of mere mortals). These skills must first be "learned" as you progress through the factory by observing their paranormal use by unseen spirits.

There are two amusing arcade-style mini-games included during the game. They are fun to play, if not a bit morbid, and they're quite easy, though the developers have also included a user-friendly automatic cheat to complete them if you so desire.

Movement is done using a traditional node-to-node process, though there are a few small details that can at times make navigating the factory floors difficult. On more than one occasion, I became confused as to where I was in the room, or where I had been. It doesn't help that the factory environment is inherently a bit drab, not exactly decorated to the standards of Martha Stewart. Metallic fixtures and cargo bays with spatially similar features are nearly identical in layout, so the next place to move is never particularly obvious. Fortunately, available exits on any given screen can be highlighted with a simple keystroke, and in the lobby is a floor map that became an invaluable tool to determine where I needed to go. 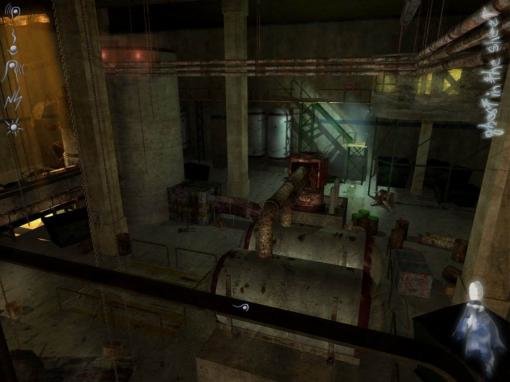 The nuances of commercial arson and its subsequent psychological effects are not the most stimulating of topics for a Friday night, but the writers have done a good job of balancing the necessary information with the non-essential extras. And although the premise is a supernatural mystery, the game has a dry, humorous touch that adds a lightheartedness throughout. The voice actors sometimes go a little overboard on articulation in delivery, but for those who want to read faster than the actors speak, the game includes subtitle support.

During the course of the game, my interest level was maintained by the mystery of Sector Omega. In the tradition of past favorites of mine like Shivers and Myst, the writers do a good job of providing an air of "what happened here?" throughout the exploration of the factory and outlying areas. And with both a hint of horror elements and liberal use of humor, along with its creative twist on traditional puzzles, Ghost in the Sheet ends up being a fun game to play.

As an interesting sidenote, the developers originally intended to release the game as a self-published form of shareware, but the positive early reaction to the game convinced them to pursue a more traditional publishing route. And based on my initial time spent with the game, that looks to be a fairly safe bet, as it's not only an interesting game in its own right, but could very well set the stage for future ghostly adventures. There is no official word on when Ghost in the Sheet will be released just yet, but the game is complete and currently in beta testing, so final release shouldn't be too far off. Publishing deals have already been signed for Russia and Germany (where the game will be released under the title S.C.A.R.E.), and negotiations are well underway for the English version of the game, so we should be hearing more details in the near future.