If you've heard about Daemonica in passing, perhaps you've already made a few basic assumptions. After all, if it looks like Diablo and sounds like Diablo, it's probably a lot like Diablo, right? In fact, let's go over the tried and true checklist of ye ol' dungeon crawl:

Yes, indeed, the evidence mounts quickly that a garden variety hack 'n slash is heading towards store shelves in March. So why cover it at Adventure Gamers? Because it's really an adventure, that's why. Or at least, it's far more adventure than anything else. Once again, we find ourselves faced with the "is it or isn't it, and if not, what is it?" dilemma that inevitably arises whenever a game dares to push beyond conventional understanding of a genre we thought we knew so well. Daemonica is certainly one of those titles that defies easy labeling, and as such, it risks being overlooked, misunderstood, or wrongly dismissed. Fortunately, the game's North American publisher -- a relative newcomer called Meridian4 -- has provided us with a playable preview copy of the game for a first-hand look. 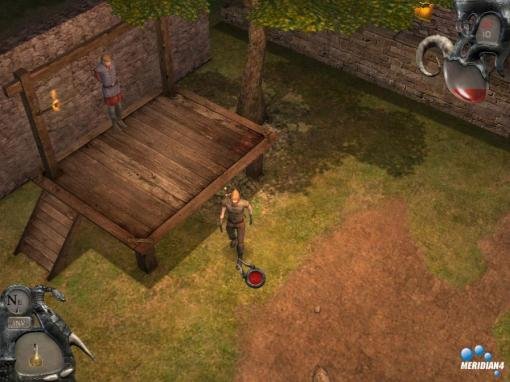 Daemonica touts itself as a "3D interactive murder mystery", and despite its surface similarities to RPGs, a murder mystery is exactly what it is. Rather than serving only as a backdrop for action-oriented gameplay, the story is the heart and soul of Daemonica -- its heart in the land of the living where the murders are committed, and its soul during your many forays to the afterlife in search of the victims.

You play as Nicholas Farepoynt, a "Beast Hunter". Farepoynt is an outcast and a tortured man, destined to pursue the worst cases of (in)humanity by his "gift" of being able to commune with the dead through the ancient language of Daemonica. The game begins with Farepoynt arriving at the small town of Cavorn, where a couple has gone missing and a young woman murdered. Making matters worse, the town itself has fallen on hard times, with darkness covering the land, disease rampant, and hopeless people abandoning their homes. What remains is a shell of a town with only a handful of hardy citizens remaining to brave the evils befalling them.

Although invited by the mayor, Farepoynt is hardly welcomed in Cavorn. With his dark reputation and ever-hooded, mysterious appearance, Farepoynt generally increases fear, suspicion, and distrust among the townsfolk. And when the mayor announces that the case is closed, and a (potentially innocent) culprit already executed for the crime, it's clear that you're on your own to discover the truth.

Gameplay consists largely of exploring Cavorn and its small outlying region, talking to the inhabitants in search of information, and performing various tasks to earn people's trust or delve further into the mystery, which grows deeper and more sinister as the game progresses. There is very little puzzle focus in the game, as Daemonica is intent on letting the story progress naturally, and trusting the mystery itself to serve as the overall puzzle. There are a fair number of events with clue-gathering requirements before you can proceed, so it's not a mindless exercise by any means, but nor should it provide much difficulty to even a moderately experienced adventure gamer. The game does include several contextual riddles of varying obscurity, including one that borders on The Hobbit's "What have I got in my pocket?" level of unfairness. However, for the most part you'll progress steadily, except in those instances where the game decides to challenge you with a game of "guess the random clue provider". Those are always annoying, unless you happen to be one of those people who instinctively think, "why don't I go check the middle of the cemetery to see if someone is now standing there with information I need?" 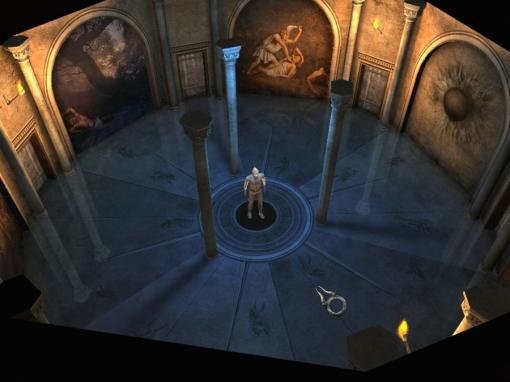 One interesting feature is the potion-making process. There are herbs you'll need to collect to make various potions, and each is replenished and randomly placed at the beginning of the game's five "acts". Creating potions is neither complicated nor particularly innovative, but it's certainly not common in adventures these days, and it helps you feel connected to the story in Daemonica. Admittedly, there are times when it's frustrating to find a last herb you need, and you'll curse it as unnecessary busywork, but generally speaking it works well without posing a significant impediment.

The most important potion is the "soulgreep". In a dangerous and painful experience (for Farepoynt, not the player, fortunately), soulgreep causes a demon to rip out his soul and carry it towards the realm of oblivion. However, knowing the language of Daemonica, Farepoynt can order the demon to stop at the Temple of Sacrifices between the living and the dead. It is here that you can talk to the victims after answering a series of questions to correctly identify the soul you seek. If successful, you'll get a wealth of necessary information to take back with you. If not, you'll light up like a flaming marshmallow and pray that you saved recently.

Indeed, there are deaths in Daemonica, and some of them will undoubtedly be yours. Whether from incorrect choices, timed events (with insanely generous time allotments, so breathe easy), or melee combat, you may find yourself restoring from time to time. However, you can save anywhere, any time, and you will never find yourself in trouble without fair warning... Oh, you caught that "combat" part, did you? Okay, then, let's confront the issue sure to be the biggest point of contention and confusion about Daemonica.

It's true that there is unavoidable sword fighting in the game. However, it's possible to get through the game with only six -- count 'em... SIX -- such encounters. All right, to be fair, there are seven to get the optimal ending from among the several available. If that's not sufficient to relieve anxiety in the less dextrous adventurers, would it help if I told you there's a toggle option to make the combat easier? If that still doesn't do it, then the combat mechanics themselves will be sure to. There are precisely two -- count 'em... TWO -- combat maneuvers: defend and attack. Defend is virtually foolproof. By holding the Space bar, you parry with your sword, and your opponent, apparently having the brain capacity of an amoeba, will never register the fact that the attack is not working. Assuming you're capable of even slightly higher cognitive functions, the only thing you need to do is let go and click the attack button while your enemy is exposed. This pattern should take about ten (no need to count this time) seconds to discern, and the rest is just a matter of executing correctly, both literally and figuratively. I kid you not, it's a cinch. And you can afford to screw up a bunch of times, too, as your health meter is plentiful, and you can heal yourself with a tasty potion between fights. Decide for yourself if you consider seven fights in 10-15 hours of gameplay to be excessive for your own tastes, but it's decidedly not a substantial part of Daemonica. For the more aggressive players, you can take an alternate approach that will result in (slightly) more fighting, but frankly, there's little incentive to do so. 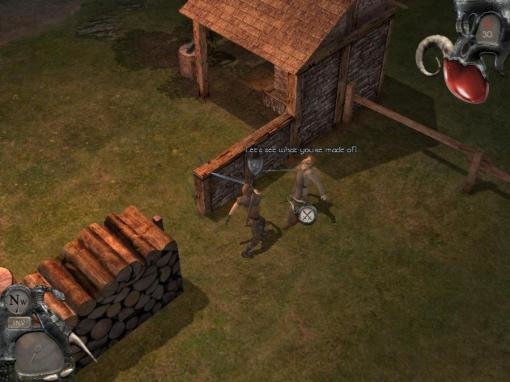 Of course, some may not even get to the combat if the control scheme scares them off. Daemonica plays with a combination of keyboard and mouse that's functional if not quite ideal. In a world rendered entirely in 3D, you'll move Farepoynt around by pointing and clicking your way through the environment. However, the camera is entirely player-controlled, so you'll need to constantly rotate your view with the keyboard for the best perspective. This takes some getting used to, but it should quickly become intuitive. The only thing that flummoxed me at first was that the rotation axis is reversed from what feels natural to me, and there is no way to flip it. So you may be in for some "not THAT left, the OTHER left" sorts of brain training, but it'll come. To help out with navigation, there's an onscreen compass, and a map you can call up with key locations identified, along with your current location and direction. Other functions like accessing inventory, clicking through dialogue trees, and interacting with items will be instantly familiar to any adventure gamer. If you're not typically a fan of keyboard games, you'll probably find Daemonica's system far more accessible than most.

One thing that will become immediately clear about Daemonica is that it was obviously made with a limited budget. This is not a criticism; simply an observation. There are quite a few corners cut to keep the presentation simple. From the absence of any significant cutscenes (even the intro and conclusion are only basic visuals with voiceovers) to a lack of relevant character animations, there's no denying that this is a no-frills game. While this may rankle people who expect more, for the most part the game doesn't suffer much from the restrictions. Just expect a little more reading and a little less watching on occasion. I really can't comment on the game's sound, as the ambient effects weren't available in my preview version, and the game still isn't fully localized from its original Czech language, so I played only with subtitles that need plenty of work. These issues will be cleared up for the final release, of course. The orchestral music creates a suitably solemn, creepy atmosphere; I just wish there was more of it. 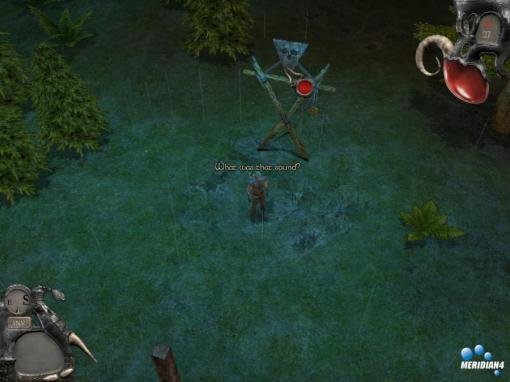 The graphics are less than cutting edge, to be sure, but are generally effective. Daemonica offers varying resolutions, along with shadow and effects options that include birds gliding above, rats scurrying nearby, trees waving, and the occasional drizzle to dampen Farepoynt's already dreary existence. My only real complaint is the long load times which occur each time you enter and leave a building or new area. You can't exactly boil an egg while you're waiting on the load screen, but there just isn't enough going on visually to warrant the kind of delay that happens so frequently. It's not a deal-breaker, but it's a nuisance that can hopefully still be addressed before release.

One thing at least can be said for certain at this stage: Daemonica dares to be different and deserves your attention. It won't be everyone's cup of soulgreep, but its occult premise, dark atmosphere, and unique presentation make this intriguing murder mystery well worth a closer look for adventure fans. As so often happens, it takes a gutsy, up-and-coming publisher to take a risk on games that can't easily be labeled and marketed, so in Meridian4, it's great to see another such publisher has stepped to the fore. Look for Daemonica to hit North American store shelves on March 28, 2006.