And Then There Were None hands-on archived preview

"It was so difficult to do, that the idea fascinated me. I was pleased with what I made of it."

The "Queen of Crime", Agatha Christie, made this comment about the challenge she faced creating the story for her book, And Then There Were None. The original novel is a classic mystery tour de force, set entirely in an isolated locale and resulting in not one but ten victims, and no murderer -- or survivors -- to be found. Not only did the story create a relentless tension throughout, but after setting the stage with a seemingly unsolvable crime, Christie managed to arrive at a solution that worked ingeniously on all levels.

Having already been adapted to movies and stage, the next logical step was to make this story the basis for an interactive experience, and at long last The Adventure Company has obliged. Developed by AWE Productions and Lee Sheldon, a veteran game designer and writer, the game has created high expectations from both experienced adventurers and Christie fans alike. The big question is, did they meet the challenge of capturing the magic and vision of Christie's original tale and wrap it up neatly in engaging gameplay? You'll soon find out for yourselves, but in the meantime, Adventure Gamers was fortunate to get an early look at the upcoming thriller.

When playing the game, it quickly becomes clear that Sheldon took more than a few liberties with Christie's original plot. First he created a new character as the player's alter ego, Patrick Narracott, who is the brother of the boatman in the novel. Sheldon then added some new twists and challenges, and not one but several new endings. Fans of the book weren't overlooked, however, as the original ending was kept as a bonus feature, once the game is completed. 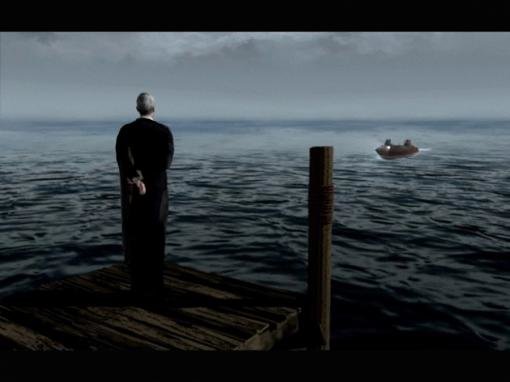 In this new spin on an old tale, ten people, each with something to hide and perhaps something to fear, are lured to Shipwreck Island by a mysterious host who fails to appear. The fact that their enigmatic host is named U.N. Owen (or perhaps "Mr. Unknown" as one hapless invitee notes) is hardly reassuring. To make matters worse, a violent storm drives them inside the house and keeps the world at bay. Their only immediate avenue of retreat, Narracott's boat, is soon sabotaged and the group is cut off from everything. It is a strange beginning to what promised to be a relaxing getaway. Stranger still is the centerpiece that greets them when they are directed to the dining room for their meal. It features ten sailor boys arrayed in a circle. It is an odd decorative touch and certainly gets their attention. The guests retire to the front room, discussing Owen and learning that no one there has met the man. Suspicions arise about their host, the nature of this gathering and what lies ahead. Another notable item is an oversized framed poem over the fireplace. It is a child's rhyme about ten little sailor boys who meet their deaths in some uniquely gruesome manners. The butler interrupts their conversation with the news that their host has been unavoidably detained, but has left a recording for them to hear. To their stunned surprise, it is anything BUT a congenial greeting. It is, in fact, an indictment of each guest detailing each person's "past crime". One by one, the guests are charged, and one by one during the course of the weekend, they die in one of the unique ways hinted at in the poem. And with each new death, the odd dining room centerpiece loses one figurine.

Our determined sleuth Narracott must attempt to uncover the truth about these people, the island, Mr. Owen, and resolve a few of his own dilemmas. Though he doesn't appear to be on the list marked for doom, he has a few of his own secrets and a personal link to this group of dubious characters.

The game opens with an extended introduction to the cast, as each makes their way to Sticklehaven, a small fishing village. Once everyone arrives, they take the boat to Shipwreck Island. This is more than just an attractive opening cinematic, though it is that and more. Little pieces of the mystery and tantalizing details about each character are revealed here. Every archetypal character is represented, from the retired judge, the privileged son, and the beautiful governess to the dotty old general. Then we have the doctor whose hands shake from nerves -- or could it be that he craves a stiff drink? Although there is some inconsistency between the look and quality of the character graphics, overall they look good and are nicely animated. Each character is very personable, with the voice and deliveries always in character.

There is much to like about the look of this game. Every screen is highly detailed, from the rocky shoreline to the opulence of the Frank Lloyd Wright-inspired house. This house is handsomely drawn, featuring finely crafted woodwork, ornately tiled floors and art deco flourishes that echo the dominant 1930s style of the story.

Supplemental animations are liberally applied to create a dynamic look and ambiance to the game. The seas roll realistically along the shore and against the dock. The rain (which will be a constant factor both atmospherically and as a game management device) mixes with sounds of the surf, wind and other sound effects to create a savory treat for the ears and eyes. There was a lot of obvious care given to the least little details of this game in terms of lighting, shadows, and the sounds of walking on various surfaces. Even the angle of the rain shifts as you change your view. The developers added moody period music, including original pieces written by the game's project director, Scott Nixon, to complete the ambient charm. 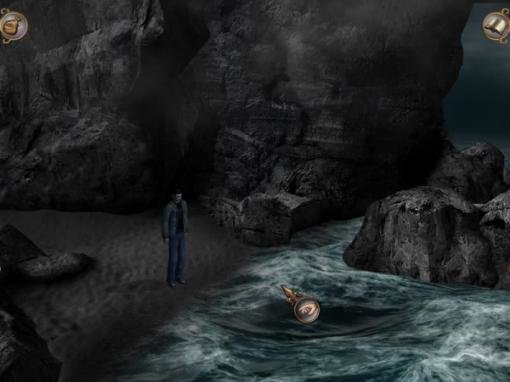 The art deco motifs are also well represented in the menus and interactive icons. Inventory items are stored in a stylish wooden case, with traditional look and use icons. A handy journal features tabbed sections that you'll fill with comments and findings about general facts, characters, documents and in-game reading material.

And Then There Were None does feature some traditional standalone puzzles, courtesy of the island's missing host, who left word that no party would be complete without a few games. Dialogue driven challenges are prevalent in the game, requiring the player to choose the way in which Narracott questions and approaches other characters. Depending on how well you choose, a character will become more or less cooperative. The process worked well in this early look, and isn't too difficult to negotiate or correct if you stumble in your approach to a person, as there are always small favors you can perform to get back in a character's good graces. The remainder of the puzzling revolves around inventory applications, and many things have to be combined to create some new item to solve a dilemma.

There is one aspect of inventory application that felt problematic, and even in an early look bears mentioning. Inventory items are combined by placing up to four items in slots at the bottom of the inventory screen. However, unless you have all the correct items together, the game offers you no clueing. So if two of the items are right and a third or fourth is incorrect or missing, you are simply told it won't work, leaving you on your own to figure out whether any were right or if you were completely off-base. This may be more realistic, but the absence of feedback does complicate gameplay, so whether it frustrates or fascinates will be up to the individual gamer.

The game feels somewhat non-linear up to a point, in that there are a large number of items you can find and things to do on any given day, and the timing of these discoveries may impact your ability to react to certain events. You do feel nudged along, but with a light touch, as there are some hints strategically placed within the game, including calling cards left scattered around by your missing host. There is also a need for stealthy sleuthing on occasion, because unlike many games, being caught rifling through someone's possessions doesn't improve your odds of gaining their cooperation. Get on their bad side and they won't give you valuable answers you might need to make the most of this mystery. My initial playthrough had me frequently wondering what might be different if I had tried a different idea at an earlier occasion. Several times I returned to previous saves to test out different theories. For the most part, what I gained were some optional side stories and character actions, but ultimately you have the potential to save at least a few of your housemates from a grim fate, so there is definitely some replay value for those who are curious about all of the game's possibilities.

With its stylish looks, memorable characters, classic storytelling and devilish challenges, it appears that And Then There Were None has much to offer and even more secrets worth uncovering. So who survives this deadly weekend and who is our mystery killer(s)? Discovering those answers for yourself is all part of the fun, and you'll know soon enough, as the game releases in just a few short weeks.

Agatha Christie: And Then There Were None