"Welcome to Metronome, a unique third person adventure game where sound is your weapon."

So says the introduction to The City of Metronome, one of the most intriguing and innovative games to appear in recent memory. To avoid confusion, I would personally rephrase that as 'Welcome to Metronome, a unique third person adventure game where sound is your interface'. While the advertising version has a catchier ring to it, Metronome is already sure to strike a lot of people as an action game. Based on our demonstration at E3, however, this game has as much in common with the adventure games we know and love as with any arcade game.

Metronome is the first game from a small Swedish team by the name of Team Tarsier. Although the game is only currently in a prototype stage, and has yet to be picked up by a publisher, it shows such promise that a distribution deal seems certain... unless its originality scares off conservative-minded publishers. For now, development is planned for the PC and next-generation consoles.

As the title suggests, the game is set in the city of Metronome. Metronome is fully run by the Corporation, a huge company that owns all the land and the industries on it. The city was constructed when the Corporation discovered the secret of a machine that creates ideas and designs for world-building. The Corporation built its own version of the machine, and in order to keep the machine and newly-built areas running, they began seizing children and putting them to work. Your character is a young man working as an apprentice steam-train engineer, who meets a girl aboard the train he's working. This girl begins to make him question life -- what purpose does life in the city have? Can the Corporation really be trusted? Together they (and you) embark on a journey to discover the truth behind the Corporation's mysterious plans. 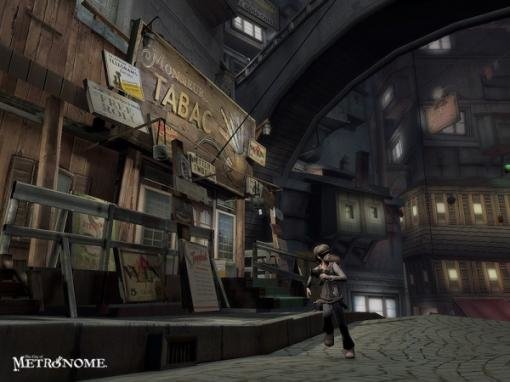 The developers claim that, contrary to the way most games present it, the story in Metronome will unfold dynamically while playing, rather than through intermittent cutscenes. The plot will emerge through the events of the game, and things become clearer as you gain more information from the people you meet and places you visit. Although at the moment the studio is keeping the finer details under wraps, the story promises to be of paramount importance in Metronome.

Interaction in Metronome is accomplished primarily by using sounds. Your character manipulates his environments, and the characters around him, by recording and replaying sounds using an apparatus strapped to his back. The uses of sounds vary from having a character's recorded speech open a voice-activated lock, to taking control of another character by creating certain noises. Anything that generates a noise can be recorded, and the sound can be modified by shifting the pitch and frequency to create different effects using one base sound. Certain types of sound, whether loud and aggressive or quiet and high-pitched, have different effects on different things, so strategizing which sounds you'll need for specific purposes will be integral to the gameplay.

Movement in the game is accomplished by direct character control through a full 3D environment. The roaming camera focuses on the area nearest your character, rotating and panning to always provide a clear view. In the E3 demonstration, a console gamepad was used, and there's no word for now on the proposed PC control scheme.

There are a number of different types of characters throughout the city. Metrognomes are children who have had their souls extracted; mindless zombies used to perform menial tasks. You can take control of metrognomes by playing soothing, melodious sounds at them. They will then perform any simple tasks you ask of them, be it moving a heavy crate that's blocking your path, or (as we witnessed in the E3 presentation) throwing itself to its possible doom in the grinding gears of a machine, which isn't just for gory kicks, but part of a puzzle. 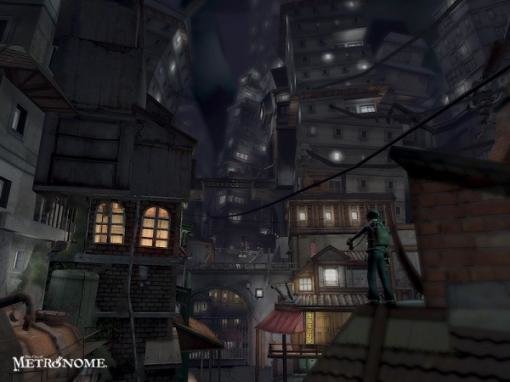 Scouts are the police force in Metronome, fueled by the souls stolen from the metrognomes. They are not necessarily always human, as they can be any kind of humanoid invention, animated only by the souls contained within. They will chase you and attack you if they catch you. It is this aspect of "combat" that will concern some adventure gamers the most, but based on our demo, these fights are less reflex-intensive action sequences and more strategic problem solving. They may attack you, but you don't fight them back -- at least not in the traditional, physical manner. Bypassing and defeating scouts will be a puzzle in itself, as they react badly to loud, jarring sounds, which scare their powering souls out of their shell. However, you will need to maneuver your character within range to apply the sounds long enough to defeat your opponent, so there is certainly a degree of manual dexterity required. On the other hand, it is also possible to avoid confrontations with the scouts by simply keeping out of their way.

Despite its obvious reliance on sound, Metronome's graphics are excellent, even by the standards of other modern games. The art design has a unique, twisted style, vaguely reminiscent of Tim Burton's Nightmare Before Christmas. The studio's art director cites a lot of inspirations, including Asian horror movies and European children's cartoons. From what we saw of the game, the city promises to be a dark, complex, sprawling mass of interconnecting alleyways, with the occasional large open area. The developers promise the ability to "explore winding alleys, skewed rooftops and crowded apartment buildings," and most visible landmark buildings on the horizon will be accessible at some point in the game.

Whether The City of Metronome will ultimately be considered an adventure game or an action-adventure hybrid remains to be seen. As it stands currently, it fulfills so many of the things that make an adventure: exploration, puzzle solving, and a rich, developing storyline. That it does so with a creative premise and striking art design in an immersive 3D world just adds to its immense potential all the more. With such promise shown after only four months' development time, we can only hope that a progressive publisher will step forward and give Team Tarsier the opportunity to deliver on this novel and innovative game.

KEEP ME UP TO DATE ON The City of Metronome Subscribe to our newsletter and we'll keep you up to date!

The City of Metronome 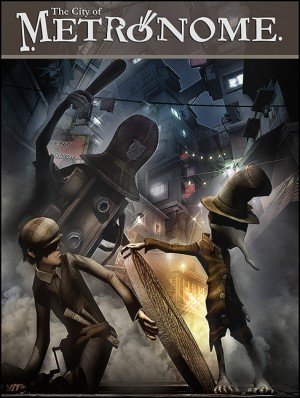