Last winter, the release of Kheops Studio's Return to Mysterious Island took many adventure gamers by surprise. With its premise grounded in classic literature and its heavy emphasis on the collection and use of inventory items, RtMI took some of the basic staples of adventure gaming and made them fun again. This fall, Kheops will try for a repeat performance with VOYAGE, a game that's not a sequel to RtMI but is, in many ways, its spiritual successor. At E3, Kheops' CEO Benoit Hozjan gave Adventure Gamers a look at what's shaping up to be a unique and complex game.

Just as Return to Mysterious Island was inspired by the work of Jules Verne, VOYAGE was also born out of two of Verne's novels, From the Earth to the Moon and Around the Moon. VOYAGE's main character, Michel Ardan, and his traveling companions, Barbicane and Nicholl, are borrowed from these books. In Verne's novels, the space travelers never managed to land on the moon. In VOYAGE, however, not only does their capsule land, but Michel is the only one of the three who survives the trip. As the game opens, Michel finds his companions lying lifeless in the capsule, wrapped in sheets. What happened to them? This opening question leads into the first phase of the game, what Hozjan calls the "investigative portion." By exploring the capsule, the player will learn background information about the three companions and their voyage, all the while piecing together the mystery of how Nicholl and Barbicane died. The progress of the investigation is represented on an interface screen that initially contains sixteen blank spaces. As the elements of the investigation fall into place, these blanks fill up with pictures that represent snippets of information. The clues can be uncovered in a nonlinear fashion, depending on how you go about exploring the capsule. When you've uncovered all of the clues, you can review the story to see what became of the unfortunate companions. This investigative style of gameplay is new for Kheops. Although it's only employed at the beginning of VOYAGE, Hozjan told us that if the format is well received, Kheops may build on it in future games.

Players who enjoyed RtMI will find a lot to like in VOYAGE. The same rendering and engine have been used, as well as the highly popular inventory system. But VOYAGE's visual style is very different. VOYAGE is played from a first-person perspective, but the Michel we see in third-person graphic depictions is an eccentric mad scientist, with big eyes and wild hair that give him an air of perpetual surprise. This persona is based on his characterization in the novels. The capsule's décor has an early 20th century feel, with plush velvet cushions, brass details, and gadgets derived from the science of the time. At points in the game, comic-style drawings are used to show certain actions, the same way they were in RtMI. These look like woodcut lithographs out of the original editions of Jules Verne's books. The period visuals reinforce the game's time and place.

Until recently, many of the screenshots that had been released for VOYAGE showed only the inside of the capsule. From what we saw during the demo, however, only a small portion of the game takes place there. Once Michel has completed his investigation into Nicholl and Barbicane's deaths and found his way off the capsule, he gets to explore the moon. This is where the game's eeriness and creativity take hold, and the developers have run wild with the possibilities. As you can see in the screenshots below, the lunar surface is thick with phosphorescent vegetation—nothing like the image of stark, cratered landscapes that modern science has instilled in us. Kheops' intention was to create a frontier as new and foreign to the player as it would have been to Jules Verne's readers. To do this, they built off of not only Verne's vision, but also that of his contemporary H. G. Wells. Georges Méliès' silent film Le Voyage dans la Lune and Tim Burton's Mars Attacks! have been cited as other influences. The player will encounter a number of lunar beings and animals, including an intelligent race of Selenites (a name borrowed from Wells' 1901 novel The First Men in the Moon). Much of the gameplay involves befriending and interacting with these beings, who have a distinct history, language, numerical system, and cultural and social hierarchy. The player will learn to communicate with the Selenites by deciphering their icon-driven language, and will interact with them through music-based and logic puzzles. As communication with the alien race becomes easier, new possibilities will open up to Michel, such as the ability to buy goods that will help him repair his capsule.

One of RtMI's most talked-about features was its unique inventory system. Kheops has taken pains to preserve what players liked most about this system and to improve upon the lesser-enjoyed aspects. As before, a huge range of items will be available for Michel to pick up and use, both in the capsule and on the moon. The inventory screen is set up the same way as in RtMI, and again, players will find themselves following a sort of formula to combine items and create tools. One of the new elements is an in-game reminder of the player's immediate objective, available through the click of a button. This could prove very useful in a game with so many usable items and variables. Kheops has also added descriptive text to the screen when the cursor rolls over an item. This way you will know what the item is and can decide whether to take it, unlike in RtMI, where you were required to pick up the item before the game would identify it. This feature, along with several other interface tweaks, is directly based on the feedback that Kheops received in reviews and community forum posts.

Some aspects of the game have been designed with replayability in mind. For example, VOYAGE contains an in-game dictionary that will help the player learn the Selenites' language. As the player learns the meanings of certain symbols, their definitions are added to the dictionary. This is a "training period" during which Michel's grasp of the language will gradually improve. Upon replaying, the player will already understand aspects of the language that were foreign the first time. For this reason, some of the game's nuances may not emerge until the second or even third time through. VOYAGE also has a point-driven IQ system that may prompt players to go through the game more than once. It's similar to the point system in Return to Mysterious Island, except now your score affects how smart Michel is about the world around him. As you discover new things and solve challenges, you'll receive points that boost Michel's IQ. There may be multiple ways to solve a particular puzzle, and with a higher IQ, Michel will have better access to the more complicated solutions. Kheops hopes that VOYAGE's players will be motivated to keep finding new ways to increase their scores, and will share their strategies for doing so with other players. But the developer does request that players (and the media) take care not to spoil the surprise ending for those who haven't played the game yet.

As in RtMI, if certain puzzles are not completed correctly, Michel may suffer an untimely death. For example, while on the capsule Michel must use rudimentary chemistry and a Bunsen burner-like contraption to maintain a breathable balance of oxygen and carbon dioxide. If the balance between these gasses dips below acceptable levels, Michel dies. Another scenario that could potentially kill Michel is a gravity-based challenge on the moon's surface, during which a meter on the right of the screen moves up and down to show fluctuations in gravitational force. The player must make Michel jump at just the right time by clicking when the meter is in the correct position. In both of these cases, the potential death is logical and not surprising, considering the circumstances. If you die, you will be taken back to the point right before it happened so you can try again. Kheops hopes that this will minimize frustration for players and may even offer comic relief, if the death was due to a careless mistake.

VOYAGE will have a number of cinematic cutscenes—more than RtMI did—and Hozjan says the game itself is longer than its predecessor, with a larger scope and deeper plot. It seems that Kheops has worked hard to give players exactly what they liked in RtMI, just more of it. This is no small feat, considering VOYAGE was made with the same budget. The game is close to completion, and is scheduled for a fall release. Until then, keep your eye on Adventure Gamers for updates on this ambitious game. 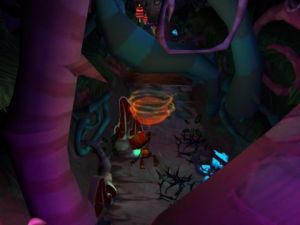 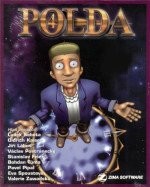 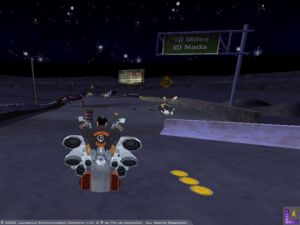