Kilimanjaro's western summit is called the the House of God... and on that summit you can find the frozen body of a leopard... No one has ever solved the mystery of why he was there and what he was seeking.

Benoit Sokal once said this phrase revealed the first clue about the debut game from his new studio, White Birds. The meaning of this cryptic reference and many other questions were on our minds as we chatted at E3 with Michel Bams and Olivier Fontenay, who gave us a first look at Paradise.

Our first obvious question was why the name change? According to White Birds, the name was shortened to Paradise because it suits the nature of the story much better than the original "Lost Paradise". For although elusive, a paradise that can be sought and found is not truly lost, and the search reflects the quest at the heart of this game.

From what we saw and heard in our demonstration, Paradise promises an even more impressive storyline than Sokal's previous titles (Amerzone and the Syberia games). This time around, we're taken to the heart of Africa. Or to be more accurate, the artist's stylized version of this dark continent -- a place of wonder, beauty, and mystique, contrasted with internal unrest and the exploitation of natural resources, all blended together to create a troubled and complex world of challenge and mystery to be faced by a new heroine.

That young woman is Ann Smith, secretly Karenn Crown, the sole heir and child to Rodon, the ruthless dictator of a sub-Saharan African nation called Maurania. When Ann was ten, her European mother divorced Rodon and fled to Switzerland. Although she has not seen her father since, and despite his horrific reputation, she remembers him with affection and misses him. Now a young woman, Ann receives an unexpected message that her father is gravely ill and desperately wishes to see her. Fearing the worst, Ann sets out, determined to reach him in time.

Unfortunately, Maurania is in a state of chaos and civil rebellion. Though Rodon makes his palace on a city-sized black ship that travels up and down the main river of this nation-state, the rebels have gained much ground and are threatening to win the war. Ann soon becomes a victim of the conflict when rebels shoot down her plane. She manages to survive the crash, but at a price. She awakens to find herself in a strange palace, with no memory of her past or why she is there. She knows only her name, found on a passport, and small details of her life in Switzerland gleaned from the scant personal possessions left in the wreckage of her plane. Having no memory of her father or her reason for being in this war-torn land, she resolves to return to Switzerland by whatever means possible. 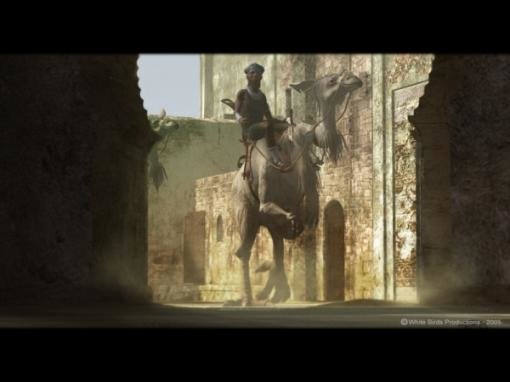 Thus begins our game and the first challenges for our character. Ann must acquire a fake ID with her new assumed name, enlist the help of the ruling Prince and make her way back home. According to the developers, the challenges she encounters are all logical to the story and environmentally-based. For example, meeting the Prince proves complicated, as normally he only sees women in his harem and lately only one has his favor. To secure his help, you must successfully pose as his "favorite wife" and sneak your way into his private rooms. We were told the remaining gameplay will feature similar obstacles (no mechanized gadgets here), all of which are organically integrated into the storyline.

The environments are broken into four distinct worlds. The first is Madargane, the city Ann is fleeing. As the rebels are attacking the country from the north, all the city inhabitants are escaping (or trying to) and everyone who has transportation has left. Ann discovers a little about her past and who she is while she is here, but most importantly, this is where she meets the leopard who will be her constant companion throughout the game. The leopard lives in the palace garden attached to the harem quarters and is freed at night to roam the extensive grounds as a sort of "watch cat". After meeting her, the Prince agrees to help Ann under one condition: she must take this leopard and return him to his native home.

The three remaining "worlds" are the Baobab Village, an emerald mining complex, and Rodon's floating city, the Black Boat. The last two areas are still in production and were not available in this version, but we saw some details of the tree village and its people. Baobab is populated by the Molgrave tribe, who have a very strange cultural taboo forbidding them to ever touch the ground. Even the dead must follow this belief, as they're lashed to poles upright so they remain always above the earth. Because of their beliefs, the tribesmen either ride around on strange camel-like animals or stay in their lofty village built entirely in the canopy on a vast stand of Baobab trees. They exist above and outside of the lives of others. As far as they are concerned, the troubles of the country, the citizens, and the civil war neither interest nor involve them.

Although you will usually control Ann, you will also have moments playing as the leopard. The strange relationship between your character and this leopard was mentioned several times, and the mystery itself will involve a terrible secret that Ann and the leopard share. So the leopard and his history are a central aspect of the story, and he will have a role to play in its development. Playing the feline, you will be able to do things humans cannot do, like climbing, jumping high, running fast, seeing in the dark, and frightening people. 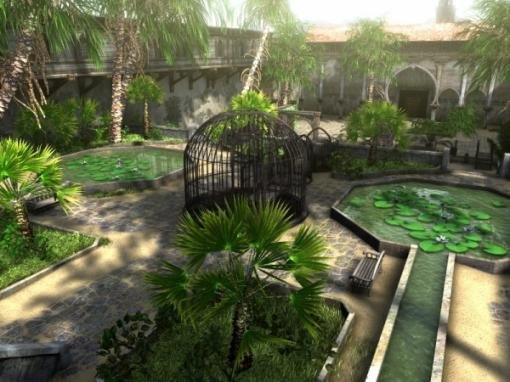 In addition to the two playable characters, there are also plenty of other people to talk to. For example, on Rodon's ship, you'll encounter not only Rodon himself, but also people from his inner circle, including an ex-mercenary called Vandenard who acts as a military counsellor, and a medicine man, among others. The game will also feature an assortment of side characters occupying the gameworld, as Paradise appears to be more densely populated than past Sokal games, adding some much-needed depth to the atmosphere.

Using the same style as Syberia, the 2D pre-rendered backgrounds of Paradise have all the rich detail now expected from Sokal's games, along with various ambient animations. There is an odd familiarity to everything that suggests this place might actually exist somewhere in a remote corner of the Earth. And yet the look is almost ethereal; right on the fringe of reality but with a surreal twist applied by the design team at White Birds. We were told how much both enjoyment and effort were involved in building the varied textures of the palace interiors, and it shows. The lighting effects on the walls, ceilings, floors, and furnishings are beautifully done. While strolling through these places, you will also see birds flying from one tree to another and the wind blowing things along its path, among other effects. Rounding out the presentation is music by Dimitri Bodiansky, who also provided the soundtrack for Syberia.

The game demonstration was but a part of the great news coming out of White Birds Productions. Michel Bams noted that although they are proud to be known for their adventure-based games, this is just one portion of their long range plans. Paradise and all future projects will be designed with multiple applications in mind. One will be the games, while another will be graphic novels. These novels will present more adult themes, including graphic nudity and other aspects that are problematic in some gaming markets. The books will follow the same basic storyline as the game with some minor plot variations and more background details. All told, there will be a total of four books released at slightly under one year intervals. The first book is complete and will be launched in France, Belgium and Switzerland in September. The fourth and final volume will appear no later than the end of 2007. Eventually, all four novels will be available in a special edition set. Partnering in this venture is Casterman Publishing, associated with Sokal since his first days as a graphic novelist, and now officially a shareholder in White Birds Productions.

But even that isn't all, as animated movie projects associated with the games and novels are also being planned, in conjunction with another business partner being added to their corporate structure. According to White Birds, they hope to make an announcement regarding the identity of this last strategic partner fairly soon.

While White Birds is moving ahead on many fronts, for now our focus returns to Paradise. Having had a chance to experience the game first-hand, are we excited? Absolutely, as this looks to be a polished, engaging world, both for the senses and the imagination. A girl, a leopard, an epic journey through the dark continent -- wonderful but perilous -- all wrapped up in an enigma of terrible secrets... What's not to like? We're anxiously looking forward to our own slice of Paradise when the game releases in February 2006.