Remember the last time you were totally excited about a game? You soaked up every bit of news, loved all the screen shots, and said, “Oh man, this is going to be great!” Then you got it in your hands, whipped it onto your hard drive, and started it up. What a rush when it proves to be everything you hoped for.

After playing through a preview of Still life, the highly-coveted new game from Microïds, I can tell you to get ready for gaming thrills, because you're in for that kind of experience again. Still Life delivers on all the hype in a big way.

The game opens with a hypnotic cinematic. A surrealistic image of a painter slashing streaks of crimson across a fresh white canvas fills our screen while an operatic requiem builds. As the unknown artist violently creates his picture, the scene shifts suddenly to a disturbing vision of an ethereal looking creature cloaked in black, almost dancing as it drags a lifeless victim into some underground lair. Juxtaposed are further images of a young woman chasing down someone--perhaps the killer, but impossible to tell. This breathtaking opening completely sets the mood and pace for the game.

The cinematics vary in style and technique to create a form of storytelling that is the best I have seen in any game to date. Bravo! While in-game movies have often been described as Hollywood quality in other games, here Microïds has created cinematics that rival current movies in quality, force, creative flow, and look. The dramatic use of lighting variations, fluid color changes, and extreme camera angles are outrageously good. If they ever made a movie from this game, I would stand in line for a ticket. Microïds has set a new cinematic mark for others to look to in the future of adventure game development. 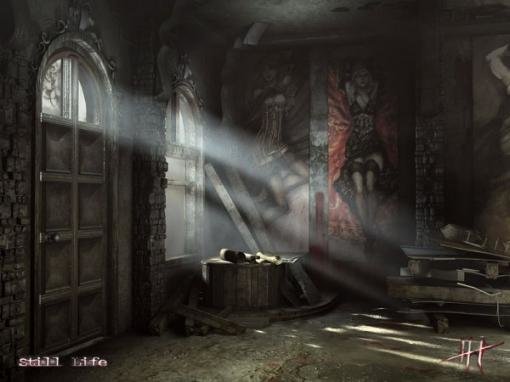 After that riveting start, I found myself at what was obviously a crime scene. Providing the backdrop are flashing lights from emergency vehicles, swaths of yellow crime tape, and a beat cop weary of the cold and maybe the nature of the job. Where are we, and more importantly, who are we? The place is Chicago, late at night outside a condemned building on the bad side of town. There have been a series of brutal, unexplained killings. Should have made the headlines, except no one seems to care very much about this slaughter. Why? Because the victims are prostitutes, and they don’t seem to matter much to the local citizens. Fortunately, it matters to one person, at least--Victoria McPherson, the FBI field agent assigned to the case.

Does the name sound familiar?

Well, it should, at least to those who have played Post Mortem. In that game, we met Gus McPherson, a private investigator from Chicago who fled under mysterious circumstances to the dimly-lit streets of Paris to pursue the life of an artist. While there, he encountered a series of terrifying murders with a supernatural flavor. However, those events took place in the 1920s, and we start this new game in present-day Chicago. So… what’s the connection? Victoria, as it turns out, is his granddaughter. While her father, a famed Chicago District Attorney, is financially set and travels in rarer social circles than Gus, Victoria turned down a different road. She chose to walk the path of her grandfather and is an FBI field agent, drawn into the pursuit of serial killers. She now has her hands full with these local killings, and is determined to get to the killer before he strikes again, or worse--vanishes without a trace into the mists.

Returning to our opening crime scene, Victoria searches for anything that might lead to the killer. Unfortunately, tonight the trail is cold, and to make matters worse, the crime scene itself seems determined to fight back. What a night. With that disappointment, Victoria makes her way to her former childhood home and is reminded of an old trunk in the attic that belonged to her long dead grandfather. Motivated by nostalgia, she makes her way there, and after a small bit of puzzling, manages to get it open.

Get ready for a deliciously creepy change of pace, mood and scenery. The case file notes that Victoria finds inside that old, forgotten trunk serve as the initial transition from the present to the past. Welcome to Prague of the 1930s. The music now takes on a dark carnival tone. There are strange, shuddering breaths that slide in and out around ominous accordion music, intermixed with strained electronic notes that skitter around your ears. It’s both erotic and unnerving, and as you look down on a surrealistic, sepia-toned riverside scene, you know you’re definitely far removed from the gritty streets of Chicago. 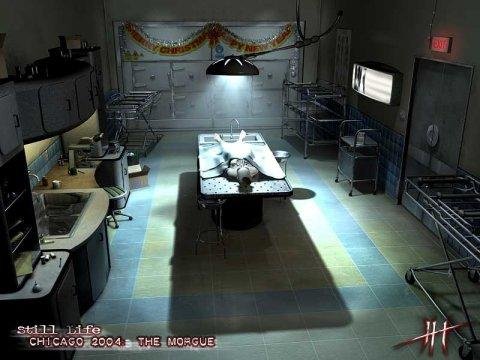 We meet up with Gus McPherson at the side of a sodden corpse tossed underneath an old bridge like so much garbage. There is also a token police presence in the figure of one Inspector Skalnic. These are not the lovely vistas of the Charles Bridge or charming castles; this is the nasty little underbelly of life. Here there are prostitutes, criminals, jaded police, and murky waters alongside burned-out buildings. Perfect hunting grounds for one who preys on those that no one cares about or even remembers. Gus has a heart, though, and it is taken by the very charming Ida, a dance hall girl, whose friends are the prostitutes and cabaret girls of this end of town. He also has his own friends--among them one Kamiser Stasek, a pretty decent policeman and fellow, even if a bit on the corrupt side. Throw in all the shady sorts he meets along the way, and you have another layer added to the engaging blend of mood, story and atmosphere that is Still Life.

I do have to make special note of one of the best characters in this game. In fact, he is one of more memorable I have encountered in quite some time. Nameless at this point, I think of him as ‘The Coachman.’ Sitting up in the rafters of the wreckage of a church, surrounded by ravens and cloaked in old clothes, he is mesmerizing. Just the sound of his voice sent a slight shiver down my back. I certainly hope that he has no real life counterpart, but I sure love his role in the game.

So begins a tale that stretches from the streets and sewers of Prague to modern day Chicago and back again, weaving in and out towards what has to be an intense conclusion.

Adding sensory thrills to the promising storyline, the look of this game is exceptional. There is a contrast in style between the graphics of the past and the present which greatly enhances the gameplay. In Chicago, the graphics are more detailed and cleanly defined. The colors are muted shades of sunset colouring, broken up with splashes of graffiti and other bright details. In contrast, Prague has a dream-like quality to the art design. It reminds me of the treatment the past vs. present was given in the third Godfather movie. The past as seen through an aging filter lens; the present viewed up close and neo-realistic. The transition creatively drives the two areas of the game story in so many ways.

The ambiance is further developed by a judicious use of sound effects, small animations, and all the little side items to discover. This isn’t suburbia. So, if you are walking through a decayed structure, don’t be surprised to see a very healthy looking rat skitter out and scamper across the room. And these small animations are randomly generated so you’ll be on edge as odd things scurry along your peripheral vision or leap across the screen. Snow falls in a drifting curtain and footsteps echo across empty wooden-floored rooms. Graffiti covers the walls, and rotting pieces of wood and debris clutter up your pathways as Victoria nimbly makes her way around them. Incredibly, all this describes only the first environment, and the game continues to improve. Then there is the music. It is phenomenal--edgy, modernistic, and yet with subtle overtones of another time, another place. I can’t praise all of these little touches enough.

Not to leave anything overlooked, Microïds creates some interesting variations in the gameplay between these two time periods. In Victoria’s world, you will work with crime scene devices and other tools of the trade. The challenges are reality-based and completely organic to the place. You have to find your way around a collapsed staircase, gather and tag evidence, and other realistic activities. In Prague, the challenges are also logically centered in the existing game world, but there are also a number of standalone puzzles. One significant anomaly in Gus’ world is a psychic interface, as he possesses very intuitive supernatural abilities. You can access this interface as he makes his way around Prague and digs deeper into the case. It serves as an inventory-based tool, of sorts, which you can apply to certain scenes. Like looking through a filter, this perspective allows you to detect things from the past that would not be visible using any natural senses. 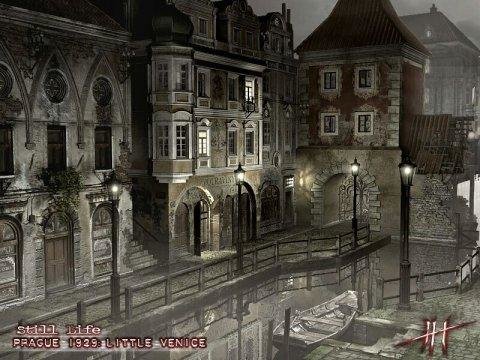 The dialogue scheme is also a refreshing change from past games. There are two choices for the gamer with every interaction. A left click on your mouse gives responses that are related to the game goals, while for those interested in a bit more tête-à-tête, the right button gives backstory comments and character asides. Unless you are a person who really can’t stand exchanges more than a few words deep, I highly recommend exploring all the options on both sides of your mouse. The characters make up one of the best things in this game, and they become far more personal when all their dialogue is heard.

Now, the game does carry with it a rating of “Mature.” One of the prime reasons is a street cop who never met a curse word he didn’t like. But picture a cop standing outside in the freezing cold, late at night in front of a dilapidated building, right before Christmas. I just don’t think he would be smiling and speaking sweetly-enunciated grade school English. I like the realistic treatment of the character, and though some might find the language offensive, I just found it honest. I acknowledge that Still Life has a Mature rating for good reason, but it’s refreshing to have a game earn its rating from a gritty plot and realistically portrayed characters, rather than mere gratuitous dead bodies and blood splatters.

What is left to say about this game? Not much, except I regret having played a limited version of the game. Why? Simply put, because I am now left hanging... waiting for the rest of the story. But I am happy to wait. With its amazing ambiance, dark story, and evocative characters, Still Life has me on the edge of my seat, eager to see what lies ahead, and maybe just a little afraid of what I’ll find. Microïds has served up one deliciously wicked game, and may well have set the pace for this year’s games. Certainly good news for gamers everywhere.