I suppose the farewell really occurred back in 1996, when Sierra released Leisure Suit Larry: Love for Sail, the last adventure title in the renowned series. We just didn't know it at the time. Despite the forgettable Leisure Suit Larry's Casino two years later, the series still looked promising with Lust in Space yet to come. When production of that project came crashing down in 1999, the writing was on the wall. Still, hope springs eternal, and the optimists continued to believe that we would one day see an LSL 8.

- It's not (exactly) an adventure game

- It isn't very good (oops, tipped my hand early; ignore this for now)

With all these strikes against it, why cover the game at all? Because ignoring it will not make it go away, and it's still a title of interest (and perhaps confusion) to adventure gamers--not to mention a high-profile, mainstream experiment that may have repercussions on future releases, so it's best we take an informed look at the game, rather than dismiss it out of hand based on prejudice. Much like the game itself is to the original series, consider this an illegitimate love child of a formal review (and in keeping with the spirit of Larry, no scoring!) 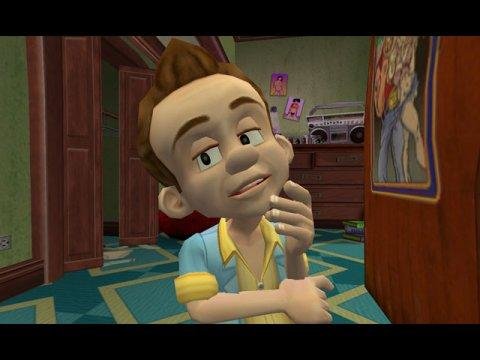 In MCL, Larry is determined to earn a spot on the reality television show called Swingles. In order to prove his studly worthiness, Larry must seduce (if his bumbling advances can be called that) and acquire a conquest memento from a number of gorgeous hotties. The premise is simple, and the plot varies only cosmetically according to the interests of the women Larry pursues. Sure it's a meagre story, but that's true of every Larry game to date, and the formula works as well here as ever. Anyone looking for more narrative complexity than "hitting on sexy chicks" need not apply.

The humour is key in any Leisure Suit Larry, and for the most part Magna Cum Laude doesn't disappoint, but it may cause some surprise. The heavy sexual content is consistent with its predecessors, but MCL uses a far more crass, in-your-face delivery. Gone are the abundance of double entendres and--dare I say it--subtleties of the early Larry games, and replaced here by overt vulgarities intended for shock value. The obscenities include the heavy hitters of swear words, too--though the "F" word is used most excessively, I'm pretty sure the writers used George Carlin's entire profanity routine as a checklist. The Larry games have always been risqué, but the new game has lowered the bar much closer to basic smut than suggestive comedy. It's unlikely to offend any fans of the previous Larry games, but it may leave players feeling more nostalgic than amused. There are definitely a fair number of laughs to be had here, but you'll be rooting through a lot of trash to find them. 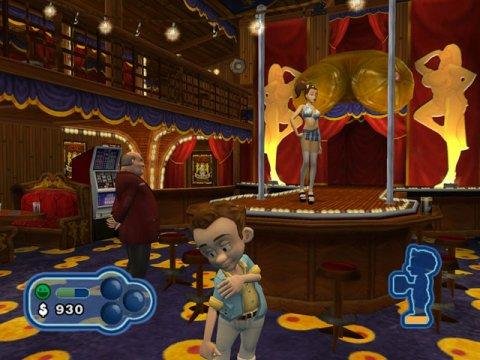 The concept of cheap thrills runs all throughout the game's presentation. Nudity abounds, for one thing. It's polygonal cartoon nudity, of course, but the problem isn't an issue of morality--it's overuse. In previous games, getting a glimpse of naked girls was always something rare and elusive, and the anticipation/frustration factor was part of the fun. Not so in MCL, where it isn't long before you reach the "see one pair of pixelized breasts, you've seen them all" syndrome. The censored version of the game sold in North America places bars over the proverbial nether regions (including Larry's), and it's actually a funny little addition. Then again, the censoring is easily patched away and the game is now being replaced by the international "uncut" version, so scrap that advantage.

All is not tawdry in MCL, thank goodness. The world of Leisure Suit Larry is now in full 3D, free-roaming splendour. The graphics are bright and cheerful, and really quite appealing in a simplistic, stylized way. The default view is in third-person, with fluid control handled through a mouse/keyboard combination familiar to any action gamers--the keys handling movement, and the mouse providing full camera panning. For those who relish the thought of kicking back, MCL also offers gamepad support, though for some reason I couldn't get any vertical panning (a minor nuisance) and experienced less responsive controls in some of the arcade sequences (we're getting to those; keep your shirt on).

The game features 25 specific interactive locations in and around the university that unlock as you progress. Frankly, this isn't enough. Each is rather small and self-contained, which feels cozy and inviting at first, but limited and confining before long. What we're offered is great, and they're fun to explore, but by game's end you'll be sick of visiting the same places repeatedly. The really irritating part is that each different location needs to be constantly reloaded (cue tarty babe pictures for distraction). No individual load is all that long (10-15 seconds for the PC version; much longer for consoles), but they happen far too frequently. You often spend as much time waiting as you do controlling Larry just to get to your next destination.

To be fair, some of the games are rather fun at first. Most notably is the one used for important dialogues. As the conversation plays out in real time, a secondary window opens onscreen, requiring the player to guide a sperm (naturally) through a linear obstacle course. Hitting positive targets guides the talk favourably, while negative targets will cause Larry to bungle his opportunities, and still others make it harder or easier to maneuver. Many are worth failing once or twice, just to benefit from the more amusing dialogue lines the negative options trigger. Failing entails a small punishment, but nothing of any real detriment. The downside to this method is that you may end up concentrating too much on the mini-game and tuning out the spoken dialogue, so a playback option would have been highly recommended here. 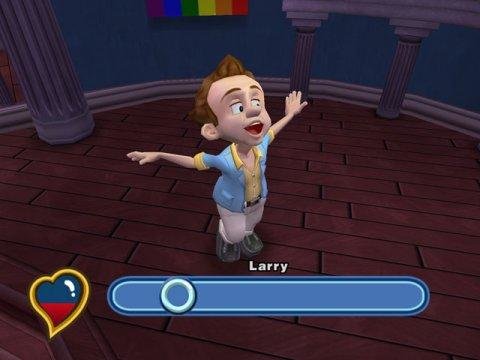 I also enjoyed playing "Quarters" (bouncing coins into a glass), "Slaps" (smacking your opponent's hands), and the "Tapper" games (delivering items down 4 rows to oncoming customers). None of them required any strategy at all, however, so they'd have better served as diversions rather than central activities. And when I say I liked them, I mean I liked them the first five times I played them--not the next six gazillion times that followed. There were also less enjoyable timed delivery activities, photography assignments, and several rhythm-based button-mashing exercises. The latter had the added frustration of controlling poorly on occasion, which wasn't a reflex issue on my part, as other times they handled fine. In any case, they just weren't any fun even the first time, let alone the inordinate number of times they're required. Perhaps the truest sign that not nearly enough imagination and creativity went into the mini-game design is the fact that you can play Pong (Pong!!) for cash. Man, adventure games are passé, but Pong is okay? I'm still trying to figure out that logic.

If you find you're having particular difficulty with certain activities, you're presented with an option to make the challenge easier after a few failures. If you're still struggling after another several attempts, a "wimp out" option is available for a small price. This sort of built-in difficulty scale is a nice touch, so credit to the developers for progressive thinking here, although in the case of MCL, after a while it struck me as more of a "fast or slow drip" option of the Chinese water torture.

Thankfully, MCL sounds as good as it looks, rather than as poorly as it plays. The voice acting is top-notch, which is no small feat, as the game boasts of having over 90,000 words of spoken dialogue. The praise applies to Larry right on down to the inconsequential campus no-names, who talk amongst themselves, think aloud, or respond to Larry's pitifully cheesy pickup lines. I'd have preferred a few more of those recorded words devoted to the latter, as the responses are somewhat limited and random, and occasionally don't fit well with the particular come-on Larry uses. Still, the voice talent assembled here puts most games to shame. 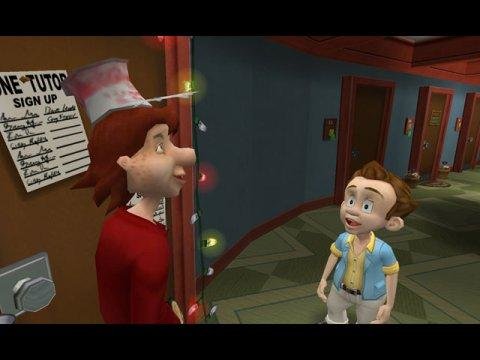 Music isn't used extensively, but there's a fun selection of instrumentals scattered here and there, along with occasional tunes by artists such as Motley Crue, Right Said Fred, and Sister Sledge. Of course, those don't hold a candle to the hilarious performance of "Lesbian Nights" by the in-game cast at the gay bar, which is a decided highlight.

There are a few other nice additions in MCL, like the "black book" journal feature, plenty of in-jokes for Larry veterans, and the disguises Larry needs in order to woo those that won't associate with an ill-attired dweeb. In a better game, I'd have given these factors more prominence. Here they're an afterthought, as are various drawbacks such as the utterly useless "confidence" meter and the complete lack of paper manual. Ultimately, though, none of these things have any significant impact.

I won't bash Magna Cum Laude for not being an adventure, though the irony here is that the game most needs even a small measure of gameplay that engages the mind as well as the hands--in other words, the very thing it rejected from Larry's origins. Nevertheless, times change, and experimenting should be encouraged, even if they aren't entirely successful. Nor will I condemn the game for being borderline pornography, as it's certainly no worse than much of what Hollywood has to offer... although I wonder about the target demographic, which appears to be teenage boys--the very market unable to purchase the game because of the restrictive rating (we'll pretend there aren't a myriad of ways to get around this issue).

No, when all is said and done, I blame the game simply for failing to follow through on its own ambitions. With a solid foundation, some snappy writing, funny characters, and high production values, there was reason to believe that Magna Cum Laude could actually deliver an experience worthy of the Leisure Suit Larry name. Unfortunately, the developers managed to seriously neglect the fundamental gameplay. There's something to be said for mini-game entertainment, but not these mini-games, and not so few of them so often. The result is a reasonably fun three-hour title. Too bad the game is four times that long, padded only by tedious repetition.