Corey Cole, one half of the brilliant husband-wife team that designed the Quest for Glory series, is quite a busy man these days, but he was able to give us a few moments and answer some questions about the end of the QFG series, fan-made adventures, the future of the genre, and more.

Adventure Gamer: What projects are you currently involved with?

Corey Cole: Lori and I are currently working with a company named "Explorati, Inc." to create a unique Internet-based system that will be a cross between games, storytelling, and a few other things. We can't talk much about it yet, but there's a Web page with some public information at https://www.explorati.com.

Did you feel Sierra's original cancellation of the Quest for Glory series after #4 was warranted?

There was certainly some justification for it. Each Quest for Glory cost more to develop than the previous one, and Sierra did not think another QG would be profitable at the budget it would require. Also, they did not have a development team available for it at the time — the QG4 team had been working so much overtime on that game that they weren't ready to jump back into another QG. In hindsight, the decision was probably a mistake. The QG4 team went on to work on Capitol Punishment, which ended up being cancelled. We started over with an entirely new team when Sierra eventually did make QG5, which led to a lot of innovation, but was inefficient and lost some of the continuity of the series.

Were you satisfied with Quest for Glory 5 when it was finally released?

As with every Quest for Glory, we weren't sure of how good it was up until the moment of release. We mostly rely on the fans to tell us that. :-) All in all, we think it came out quite well. It's different than the other games in the series, but carries the story forward well and a lot of fans have complimented the combat system.

Were there, or are there, plans to extend the series beyond episode 5?

There were no specific plans, but there was some discussion about creating one or more "mission packs" to extend the series. These would have been set in the Silmaria and Med Sea. They would be original games but would reuse some of the artwork and other assets from QG5. Lori and I were going to set up a separate company to develop them for Sierra, but we couldn't handle the numbers we heard from Sierra. Mission packs typically sell about 20% of the number of copies of a new game, and we couldn't find a way to develop one for the royalties that would provide us.

Is that idea completely dead or are you still trying to make it work?

The mission pack idea is dead. Sierra has no interest in continuing the series at this point and we can't viably release a mission pack for a Sierra game without their support. Neither we nor Sierra felt the mission packs were likely to be profitable, so the idea quietly died.

How do you feel about the new fan-created spinoff of the QFG series, Hero6?

I wish them the best of luck. Since the major cost in producing an adventure game is the developers' time (and their paychecks), it seems quite possible for a fan group to develop as complex a game if people are willing to donate enough hours (and months) of their time. The game quality will depend on whether they work well enough together that they achieve a consistent level of quality. They will also need a creative director or directors who has (as Bob Bates of Legend calls it) "designer genes" and is able to impart their vision to the team. I agree with the Hero6 team that it is not necessary to have the newest, greatest graphics technology to make a good game.

As for the game being inspired by QFG, we're flattered. Since they are not actually calling the game "Quest for Glory", we don't have to worry about player confusion or dilution of our "brand name", so we're happy to let them go their own way with the game. We don't think it will create any conflict with future titles Lori and I may create.

Do you feel that fan-created games can play a big part in the resurgence of adventures?

Yes and no. :-) Do you know the difference between an amateur and a professional? A professional gets paid. Really, that's it. When Lori and I started designing Hero's Quest 1 (Quest for Glory 1), we had been playing D&D for 10 years, had run some tournaments and published a fanzine, and I had sold one role-playing module to Judges Guild. Other than that, we had some industry-related experience — I was a programmer and Lori had studied art, writing, and film animation.

While nobody will exactly duplicate our background, there are plenty of people out there who have played role-playing games for a long time and have skill in those related areas. As long as they know their limitations and work well together, I see no reason why a team can't create a great RPG. The Black Isle team which created Baldur's Gate and several other games for Interplay might be a good example of this. I mention "know your limitations", because bad games tend to come from programmers or artists who think they are writers without really having skill in that area.

Anyway, yes, I think fans can make some fine adventure games with today's technology, that many of these games will become available on the Web as freeware or shareware, and that people will play them. In fact, we're counting on this to make our current venture (Explorati, Inc.) successful -- It's impossible to create enough content to keep a really large networked gaming system "fresh", so we're instead focussing on creating core technology and a few "example worlds", then working with other professional, semi-pro, and amateur developers to constantly extend the content.

My "no" is because the popularity of fan-created games will not have a positive impact on commercial releases. Why should players fork over $50 for a fancy, professionally-created game if they can play a dozen others that are less pretty but just as fun for that same $50 or less?

By the way, the death of adventure games is much exaggerated -- Sierra sold more copies of Quest for Glory 5 than they did of most of the previous games in the series. The problem was that it cost them 10 times as much to develop it as most of the previous ones cost and they didn't sell 10 times as many copies. There are plenty of buyers out there, but the game technologies being used currently make it much cheaper to produce a shooter than an adventure.

Do you agree with the recent decision of LucasArts to shut down the fan-created unofficial Monkey Island sequels?

I don't know the facts, so I really can't speak to this (but I will anyway). :-) If the sequels were actually using the name "Monkey Island" or any of the trademarked characters (e.g. Guybrush Threepwood) by name, then LucasArts probably had no choice but to shut them down. Trademark law is very clear that if a company does not actively protect its marks, they become public domain. Pretty soon you'd see Monkey Island porno sites, etc. benefitting from LucasArts work and not paying them anything. Even with just the fan games, sales of future LucasArts games could be damaged and they could end up spending a fortune fielding support calls from players having problems with the knockoffs and thinking LucasArts published them.

At what point did you see Sierra On-Line begin to fall apart?

That's a loaded question that we really can't answer! :-) The actual closing of Yosemite Entertainment came as a surprise to most of us. As to whether Sierra had "started to collapse" years before that, we'll leave that discussion to others.

Do you believe Sierra could ever be what it once was?

I really don't think so. Sierra has shifted directions away from creating story-based games and now concentrates on using their marketing muscle to sell lots of copies of games they consider more "mass-market oriented". I think they're too large a company to successfully make adventure-style games.

What should adventure fans be doing to promote a resurgence in the genre?

Stop buying action games. Seek out the adventure games that are still being made, buy them, and send positive feedback about them to the companies that make them. Check out Web sites like Adventure Gamer and Just Adventure to find out what's new and which games are good. Sending letters and email to companies that promote mindless, violent games to let them know that they're missing the market might also help in the long run. The game industry goes in cycles and I think we're starting to get past the ultraviolent shooter cycle. There will always be (and should always be, IMHO) such games, but there's plenty of room for other categories.

We thank Corey Cole dearly for graciously answering our questions and wish him and his wife Lori all the best of luck with their future projects! 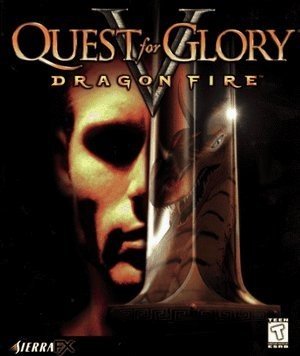 All Quest for Glory games (series/episodes)
» Discover other games