Word goes out of a Kickstarter campaign for Vokabulantis

Stop motion is a slow, painstaking, and therefore expensive process to do and do well, which is why we rarely see it employed in video games. If enough fans are willing to support it through crowdfunding, however, we could have another such game on the horizon in the form of Vokabulantis, a "love-driven" puzzle-platformer that can be played solo or cooperatively with a partner.

The game tells the story of Karla and Kurt, two shy young people caught in that awkward moment of "trying to hold hands for the first time." Unfortunately, instead of being able to voice their intentions to each other, "their mouths come off and they are catapulted into Vokabulantis." Here in this language-inspired world that's been "torn apart by their inability to speak," the pair must now attempt to "save Vokabulantis to save their kindled feelings for one another."

Vokabulantis sends players on an "epic odyssey through the City of Noun, The Word Power Crystal mines of Afasia and over the sea of the giant Verb Karbs and much more." Each scene has been meticulously hand-crafted and filmed using stop motion animation, portraying the two young protagonists' struggle to not only restore peace to this broken world by "fighting the Word Führer and Grandma Marble, the two ancient forces of language," but also to "express their feelings for each other after their words have been taken away." While there is a degree of platforming involved, much of the gameplay focus here is on "puzzle-based experiences" that can be faced either alone or with a friend in local co-op. Either way, the expected play time should be between 6-8 hours.

Now, about that "expensive" part of the stop motion experience. In order to complete Vokabulantis, co-creators Wired Fly Animation, Kong Orange and Morten Søndergaard have launched a Kickstarter campaign to raise €70,000 by April 16th. If successful, we'll still need to patiently wait out the "slow" part of such an ambitious production that should run until late 2024, though backers will get exclusive access to a demo sometime next year. If the fundraising is successful, we'll see Vokabulantis released on Steam for PC at the very least, with the goal of getting the game launched on "all major platforms" eventually. 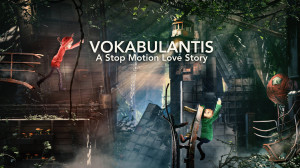