You don’t often see the word “lighthearted” precede the word “cyberpunk”, but that’s exactly the twist Australian developer Insert Disk 22 is bringing to the genre with their debut game, Born Punk.

Born Punk takes place in the year 2155 on an island in the Baltic Sea. Thanks to the “space elevator” built by a “corporate consortium called ‘The Conglomerate’, few nations on the planet are more influential both in industrial matters and space exploration.”

Players assume control of three different characters: a hacker named Eevi, an android who calls himself Grandmaster Flashdrive, and Mariposa, CEO of one of the island’s biggest corporations. All three characters are brought together when they are seemingly possessed by “strange entities of unknown origin.” They must work together – “and sometimes against each other” – to discover the true nature of these beings.

On their journey, players will traverse “a world that is not only populated by humans, cyborgs and androids, but also pirate cats living in cyberspace and other, equally wacky characters.” Insert Disk 22 promises “a comprehensive, deep setting,” and that players will often be able to approach dialog and puzzles from “different angles.”

Inspired by the likes of Monkey Island and Beneath a Steel Sky, Born Punk features “sophisticated pixel art graphics reminiscent of the genre’s classics” that are “alive and full of animation.” Fully voiced characters and “a bombastic soundtrack spearheaded by Jeff Kurtenacker of Wildstar and World of Warcraft fame” bring this not-so-dark cyberpunk future to life, with a collection of supporting synthwave musicians creating a “cyberpunk/sci-fi soundtrack with a nordic twist.” Falko von Falkner, founder of Insert Disk 22, states:

"The cyberpunk genre is traditionally dark and depressing, painting a future in which humanity’s essence was corrupted by corporate interests and technology that our species was not ready for. Whilst we stay true to this general theme, it’s important for us to show that there’s also room for humour and hope within the genre limits."

KEEP ME UP TO DATE ON Born Punk Subscribe to our newsletter and we'll keep you up to date!

Escape the psyche of an amnesiac in Incoherence 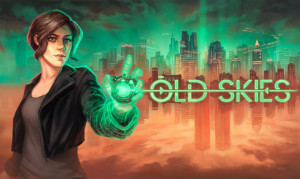