Who knew back in 2007 that Valve's Portal would not only go on to become a resounding success, but launch a whole new sub-genre of gaming in the process. But here we are thirteen years later, and the next Portal-style adventure coming down the pike is Koren Games' HYPERVENTURE, which is currently seeking funding through Kickstarter.

The game thrusts players into the first-person shoes of Symere Parrish, who awakens in the titular HYPERTURE LABS where he is "forced to complete a series of tests using the black hole gun that creates a small, personal black hole that can manipulate objects' scale and position in real time." The further you progress through the test chamber, of course, the more you'll come to realize that not everything is as it seems.

Like its inspiration, HYPERVENTURE is a first-person 3D adventure that sees players proceeding through a series of individual test rooms that grow increasingly harder and more complex. Described as a "gravitational puzzle game," its presentation is rather minimalist and largely greyscale, as befits a sterile but mysterious laboratory environment.

Conceived by a solo 17-year-old designer from Texas, HYPERVENTURE is already in production for Windows, Mac and Linux. In order to complete the game by next summer, however, the developer has launched a Kickstarter campaign to raise $5,000 USD by August 14th. 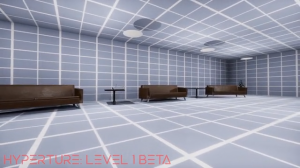