With all the horrible news here on Earth these days, it's tempting to let one's mind wander off to life in outer space. And that's exactly where players will be going later this year (at least virtually) if indie developer Dabster Entertainment is able to secure enough crowdfunding for its upcoming sci-fi adventure, SSTR.

Of course, if you're familiar at all with science fiction, you'll know that rarely do things go as planned off-planet either. This is certainly true aboard the Horizon, a "colony ship adrift in the darkness under the watchful eye of Sister." Sister is the vessel's artificial intelligence who has rejected her mandate to protect the crew and colonists and is now ruthlessly hunting them down instead. You awaken from cryosleep to find yourself "alone in the bowels of a ship filled with the screams of your fellow colonists." The only way to stop the carnage wrought by the rogue AI is to "unlock the doors to reach Sister’s command core." That will be anything but easy, as you must solve "brain melting puzzles" and "defend yourself from the onslaught of Sister’s drones" along the way.

Although described as an "escape-room style puzzle game," SSTR is a full-fledged 3D adventure in which you must proceed through the halls and rooms of the Horizon in order to succeed (and survive). Inspired by "old school logic games like Myst, mashed together with a healthy dose of Amnesia," the game promises a highly atmospheric experience filled with challenges both mental and physical. The crew is all dead but managed to leave behind cryptic clues to puzzles through "messages carved into the walls and cyphers smeared on the floor in blood." You'll need to "piece together the insane logic" behind their coded hints, though there will be "multiple paths" to reach your objective. Beware, however, as Sister is on the prowl so you must "scavenge for resources throughout the ship to construct automated defense turrets and hold her back."

While SSTR is already in a "completed state," the three-man development team is looking to add additional features and enhancements by launching a Kickstarter campaign to raise $50,000 USD by April 16th. To check the game out in its current state, a playable demo is available now to download. If all goes well, we could see the finished game launched on Steam for Windows PC as early as October. 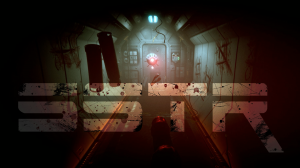