Francisco Gonzalez has explored a wide variety of interesting times and places in his previous games, from 1920s Florida to the fictional 19th century steampunk city of New Bretagne, but for his next endeavour he's heading west in the upcoming point-and-click adventure Rosewater.

Set in the same universe as Lamplight City, the game stars a young woman named Harley Leger, who has departed the big city and gone west "hoping to leave the past behind and make her way as a freelance writer." Upon her arrival in the "sleepy border town of Rosewater," she finds herself caught up in what may be the story of a lifetime when "a seemingly trivial assignment for the local paper leads to the hunt for a missing man's fortune." Joined by a small group of travel companions, Harley embarks on a "harrowing journey across Western Vespuccia, facing bandits, rebels, ruthless oil barons, and many more obstacles on [her] quest for fame and riches."

As with its predecessors, Rosewater is a classically designed third-person adventure, though this one is presented in "high resolution 1280x720 graphics" with "fully rotoscoped animations, including cinematic closeups." The protagonist's "ragtag posse" isn't just tagging along for company, as "how you treat and interact with them affects the story." Nor will they be the only ones to converse with, as you'll encounter more than 50 "professionally voiced characters" along the way. You'll also have to contend with numerous inventory-based puzzles in your travels, some of which will have multiple solutions, and if the trailer is any indication, it seems a little sharpshooting will be in order as well, as befits a Wild West adventure.

You'll need to keep that six-shooter in your holster for now, mind you, as it'll be next year before Rosewater is launched on Steam for Windows, Mac and Linux. 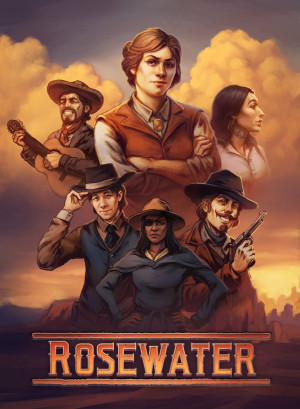 A point-and-click Western drama from Grundislav Games set in the world of Lamplight City.

The Academy set to open later this year