Players control a teenaged boy named Jesper, who "travels to a small island in Northern Norway to learn why his grandfather left." He soon finds more than he bargained for, however, as the result of a magical bracelet that is able to "affect the world around him." As Jesper begins to piece together the mystery behind this curious artifact, he will also need to learn to deal with an unfamiliar community "torn between old traditions and new, invasive industries."

Much like the one-man indie developer's previous game, Milkmaid of the Milky Way, the setting for Embracelet is inspired by Folkestad's own upbringing in a "small village north of the arctic circle." Unlike its predecessor, the new game "under the midnight sun" isn't presented in pixel art but rather a low-poly 3D aesthetic, as displayed in the early screenshots and trailer released. You'll also control the protagonist directly this time, though still with a cursor to interact with the world around him. The bracelet possesses a type of telekinetic power that will help overcome environmental obstacles in your path, but the experience is meant to be a "gentle" one that focuses more on "exploration, dialogue and choices" than puzzles.

There is no firm launch date just yet, but Embracelet is currently on track to be released for PC and Switch sometime later this year. 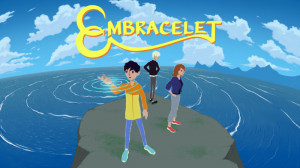