SNOW forecast to land in late 2021

"Snow in Norway" may not sound that newsworthy, but it is when SNOW is the name of Jonathan Nielssen’s upcoming open-world mystery adventure and a future version of his native Norway is where the tale takes place.

Set in the "retro-futuristic town of Barvik in 2050 Norway," the game tells a story about "identity, consciousness, and what it means to be human in the age of intelligent machines." Players assume the role of a 12-year-old boy named Oskar, who "does not know of his true nature and is set on the path of self-discovery by a voice in his strange dreams." You will need to "explore atmospheric environments, hack electronics and solve puzzles to unravel the mystery of Oskar’s hidden past and the dark secrets of his hometown." Along the way, the boy's journey will reveal "his true purpose and powers, but he will also face betrayal and pain." Created in the "spirit of point-and-click adventures" but controlled directly from a third-person perspective, SNOW has been designed in collaboration with "photogrammetry and motion capture industry leaders" to ensure a realistic presentation. The setting is "inspired by Norwegian culture" and more particularly its near-perpetually dark winters. The town of Barvik "juxtaposes '90s Nordic countryside environments with futuristic technology and designs" in such a way that "the dazzling contradiction creates a unique atmosphere that invites players to explore and discover."

There's more to do than simply roam around soaking in the Scandinavian sights, of course. Early on, Oskar will gain the ability to "hack and possess electronics" ranging from "CCTV footage to locked doors and heavy machinery." Doing so requires players to "dive down in the hacking world and navigate top-down arcade-style ASCII minigames" in order to solve a puzzle or bypass a "boss fight."

We're still at least a couple of regular winters away from seeing SNOW released, as the game isn't due to arrive on PC until late 2021. 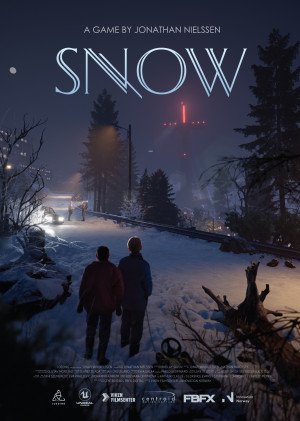