While story details are scarce, the game stars a woman named Christie, who finds herself drawn into an unexpected mystery when she receives explicit photos of a kidnapped woman via the cell phones left around the titular hotel for her to find. Unwilling to involve the police and certain the victim is somewhere in the building, Christie takes it upon herself to investigate... taking a little time for sensual pleasures when the mood strikes, of course.

In order to complete the game for Windows, Mac and Linux by August 20th, the team has launched a Kickstarter campaign to raise $8,000 USD by September 27th. For a sample of what to expect, a downloadable demo is already available, though at this stage it is still a "pre-alpha version, more of a concept" than a finished product. 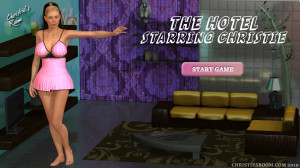