Relapse the Neverland falls back on Kickstarter for funding

Childhood trauma can come back to haunt us in a variety of ways, but none quite so tangibly as the events that took place in the titular orphanage in Cristyn Jordin's upcoming Relapse the Neverland, a narrative-driven horror adventure currently seeking crowdfunding through Kickstarter.

The year is 1942, and a "former waif named Anna" receives a "strange letter from the orphanage she grew up in beckoning her back to it." The trauma she endured at Neverland Orphanage has caused Anna to repress her memories of what occurred there, but the letter compels her to return in order to "learn who wrote the letter and why [it was posted] five years after the events of what transpired." It won't be an easy mystery to solve, however, as Anna will be confronted by numerous enemies in the process, including one she can't defeat or escape: time.

Presented in JRPG-style pixel art with keyboard/gamepad controls, Relapse the Neverland promises to include a number of different gameplay elements. Despite having foes patrolling "certain areas of the house" and one in particular that will "follow you throughout the game," their presence is intended to serve as "part of the puzzle in the grand scheme." The game promises to be "very much puzzle-based," with many of the obstacles requiring a special lute to overcome. When played correctly, the lute creates unique effects, such as "temporarily slowing down time" and even "allowing you to return to your first hour at the orphanage." Indeed, the passage of time will prove vital in many respects, as on the higher difficulty levels "you will have 24 in-game hours to successfully finish the main mission." Your decisions matter too, although here "most choices can be amended with the use of the lute," which in turn will determine which of the game's multiple endings you experience.

In order to complete Relapse the Neverland by March 2020 for Windows PC and possibly Switch, the indie developer has launched a Kickstarter campaign to raise $8,000 (US) by July 19th. To help you decide whether or not to back the project, a prototype demo is available for Windows PC. 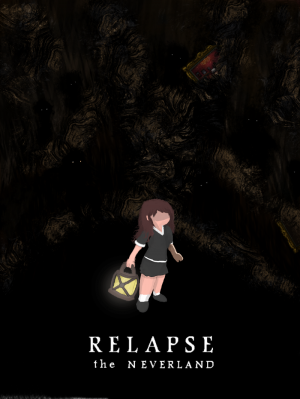