Most adventure games have you jumping through proverbial hoops to overcome obstacles, but more and more side-scrollers are asking players to leap literal platforms as well in order to progress. The latest of these is Evan's Remains, a puzzle-platformer with visual novel elements currently raising funds on Kickstarter.

Despite its rather bleak title, Evan isn't dead. He's just been missing for years, until suddenly a letter from the young genius arrives claiming that "he is on an uninhabited island in the Pacific Ocean." For reasons unknown, the letter requests that a girl named Dysis be the one to come rescue him. As Dysis undertakes the challenging journey to find Evan, "more of the underlying mystery surrounding her motives and Evan's disappearance will begin to take shape." Along the way, "each of the disparate puzzle pieces – both narrative and mechanical – which previously seemed unrelated will slowly begin to fit together."

Presented in lovely pastel-coloured pixel art, Evan's Remains may be keyboard- (or gamepad-)controlled and look like  a standard platformer, but the key to overcoming the physical obstacles blocking the way "lies in the player's ability to understand and solve the puzzles using logic, rather than to overcome challenges based on physical skill." In between discrete narrative segments "rich in mystery and punctuated by dialogue from a unique cast of characters," new puzzle mechanics are progressively introduced into the gameplay and "as the difficulty curve increases, the puzzles become more complex by combining two or more of the previously introduced mechanics." There will be "no enemies, no punishments, and no failures" to abruptly end your game, however, so players can "sit back, relax, solve some puzzles" at their leisure.

The goal is to release Evan's Remains simultaneously in May 2020 on PC, PlayStation 4, Xbox One and Nintendo Switch, but in order to do so, indie developer Matías Schmied has turned to Kickstarter to raise $10,000 (US) by July 18th. If you'd like to check out the game firsthand before deciding whether to pledge, you can do so through the downloadable demo available on itch.io. 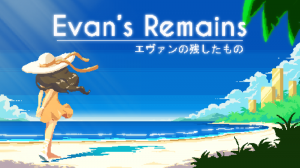