What's better than a new game from the creators of Unforeseen Incidents? How about TWO new games from Backwoods Entertainment? Better yet, both of them have recently received funding for various stages of development. The first game we knew about already, in the form of RESORT, an interactive short story "about emotions, introspection, and coping." In this "strange and somewhat weird, Twin Peaks-like experience," a famous writer named Laura Tanner "embarks on a surreal journey and faces an odd intersection of dreams and reality" when an inbound comet "threatens to hit the woods around the small town of Laburnum Creek" but some residents refuse to leave. Having already received some prototype funding to get started, the big news now is that the game has received an additional 100,000€ grant from the Film- und Medienstiftung NRW to complete production.

Not content with just one game on their plate, however, the indie developer has also received 20,000€ for the "conception" phase of another new title, Pen & Paper Stories: Morriton Manor. Described as a "narrative genre-mashup comedy adventure game with point & click and RPG elements," this franchise may be largely unheard-of outside of Germany but has appeared previously on the German internet TV channel Rocket Beans.

Morriton Manor stars "four famous noblemen detectives who investigate supernatural phenomena in Victorian England." At least, the web version does. In the game, however, these four men "disappeared during their last mission on Delagney Island." Players assume the role of private investigator Harriett Juana Brook, who has "some experience with the unnatural" and heads to the island to find out what happened to them. Once there, Brook finds herself "not only confronted with the mysteries of the missing counts, but also a strangely bewildered countess, a suspicious groundsman, a horrifying creature in the woods, and a surreal time paradox that somehow seems to have imbalanced everything."

Co-written by Backwoods and series creator Hauke Gerdes, Morriton Manor will not be mouse-driven but will feature the same hand-drawn 2D art style as Unforeseen Incidents, promising a "beautiful adventure game with challenging puzzles, an intriguing story, quirky characters and a world full of secrets, mysteries, and witty jokes." The team is still in the process of fleshing out the genre-blending gameplay elements, but players can expect a degree of role-playing in which the protagonist's customizable skillset will allow different approaches in overcoming problems, with the storyline branching in places accordingly.

The plan is to release Pen & Paper Stories: Morriton Manor on Windows, Mac and consoles (and possibly Linux) with both English and German voice-overs (and additional language subtitles), but with the game still in its preproduction stage, it'll be at least 2021 before its launch date arrives. 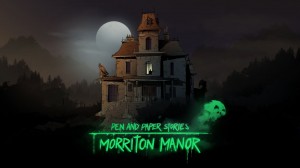