As the coldest, least populated continent on the planet, Antarctica is known more for its ice and penguins than for international intrigue. That might change soon enough when indie German developer Matze Klein releases his debut adventure, Echidna's Daughter.

The game stars a detective from Berlin named Zip, who is ordered to investigate an alleged murder at a remote polar research station. Upon his arrival in Antarctica, however, he quickly comes to suspect that "something is wrong" here, and that there are secrets being deliberately hidden from him. Perhaps the most important question of all to his case is "who or what is Echidna's daughter?"

Presented in a distinctive hand-drawn art style, it may not look like it but Echidna's Daughter is inspired by the LucasArts classics like Monkey Island and Indiana Jones and the Fate of Atlantis. In this point-and-click thriller with Lynchian vibes and subtle comedic elements woven in, players can expect an adventure "full of weird characters, mysterious places and secret secrets" with a variety of puzzles to solve along the way. Some of the challenges will be "adjusted to the speed of the action" during important story moments, triggering increased escape room-style pressure to overcome.

Though development began back in 2016, production on Echidna's Daughter still has a way to go, with a target completion date for Windows and Mac not due until late 2020 or even 2021. In the meantime, however, you can follow the game's progress through the official website.

Note: Certain details have been updated at the developer's request to reflect changes to the game's design since originally announced. 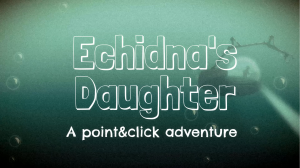