Many of us are probably looking forward to warmer weather and more sunshine in the coming months, but the creators of Hero-U: Rogue to Redemption have already their sights set a year beyond that with the announcement of a spin-off prequel story called Summer Daze at Hero-U.

The new game is set during "the semester before Shawn finds his way to the Hero University." It's getting late in the Summer session and "the Harvest Festival is approaching. Somebody has to be in charge of making sure the festival is a success – whether they want to or not." Players can choose to play as either a Rogue or a Wizard, but in both cases you will need to "find ways to recruit" your fellow students at the school who "may or may not help you."

We don't yet know much about the gameplay of an experience designed to be "all about finding friends, fixing a festival, and having fun." We do know from the early artwork released that the game will feature an "elegant 2D illustrative style with a bright palette and tone that fits this lighthearted story." The choice of two protagonists is far from merely cosmetic, as the challenges will not be the same and Tilly Appleberry and Ifeyo Kinah are "very different people." The former is "a carefree Rogue who gets through life with a twinkle in her eye, a grin on her face, and a talent for mischief," while the latter is "a serious Wizard student who loves to study magic."

While currently targeting a final release in the summer of 2020, Lori and Corey Cole and their team are hoping to have Tilly's part of the story completed before the end of this summer, "just in time for a fall Kickstarter to help fund the rest of the project." To follow the progress of Summer Daze at Hero-U in the coming months, be sure to stop by the official website. 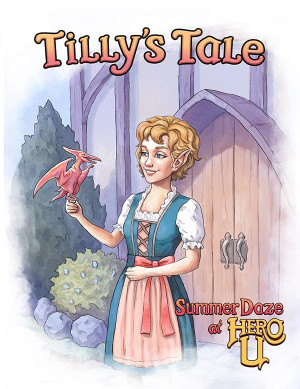