Journey for Elysium begins on Kickstarter

You're sitting in a rowboat on a peaceful river. Sounds like a lovely way to spend a summer's afternoon, doesn't it? Not necessarily to Belgian developers Mantis, whose upcoming VR title Journey for Elysium casts you in the role of an unnamed warrior, killed in battle and now floating underworld-bound on the River Styx. Guided by a mysterious companion known as "the passenger", you must undertake a journey across time, history and myth to find the titular paradise, and ultimately redemption, in an "epic story inspired by Greek-Roman tragedy" currently seeking funding through Kickstarter.

To get to Elysium by boat, you're going to have to row, and this very act is one the most important motion control mechanics in a game that aims to maximise immersion. That said, there's more to the journey than simply putting paddle to water: you'll encounter barriers, monsters and other obstacles that throw up environmental puzzles for you to solve, all while attempting to unravel your passenger's mysterious story along the way. The game promises a wide range of ever more elaborate challenges, along with a generous helping of references to classical mythology, in an experience with a very hands-on physical component but influenced by the point-and-click adventures of the '80s and '90s.

All this is rendered in a striking monochrome 3D art style inspired by the paintings of Gustave Doré, and in particular his illustrations of Dante's The Divine Comedy. In fact, the only splashes of colour are golden highlights of interactive elements, so as to emphasis what's important but not distract from the dark, theatrical atmosphere. The developers are also aiming to accommodate a wide range of players: whether you are standing or sitting, you can teleport in "comfort" mode or actively move using your thumbsticks in "immersive" mode.

Journey for Elysium will hopefully sail onto HTC Vive and Oculus Rift by November 2019, with other virtual reality platforms including PlayStation VR to follow. If you want to delve into the game further, you can check out the official website and more importantly, help support the Kickstarter campaign, which aims to raise €20,000 by April 18th. 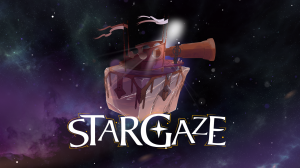