First details arise from Our Secret Below

While the non-gaming world is only just catching onto the fun of escape rooms, we adventure gamers have known it for a long time in virtual form. We'll soon be getting another chance to flex our escape muscles (or more accurately, our escape brains) with DarkStoneDigital's upcoming Our Secret Below. The game stars Nia Davis, a young woman who has "woken in a haze to a small cell in an unfamiliar basement." Kidnapped and chained to the wall by an "obsessed stalker," Nia manages to eavesdrop on her captor's conversation with an accomplice in which it becomes clear that "she doesn’t have long to live." As Nia, players will need to "escape the basement before it’s too late. However, things aren’t always what they seem. There may be more to your captor than simple obsession." And as you explore, you soon learn "through the help of hidden notes left by the previous victim [that] this isn't the first time this psycho has done this. He's clearly had practice keeping victims locked away."

Created by industry veteran Brian Clarke, who recently launched the survival horror adventure The Subject as his first indie effort, Our Secret Below is presented in first-person, free-roaming 3D style. As with most games of this type, events all take place within a small environment where you must help Nia "solve various puzzles, find clues, and help her escape to freedom." However, the developer's focus on storytelling within this confined location promises to be "very different than what people usually experience in escape room style games."

There is no firm timeframe yet for its release, but Our Secret Below is currently on track to be launched on Steam for Windows PC sometime later this year, with an Xbox One version also planned. 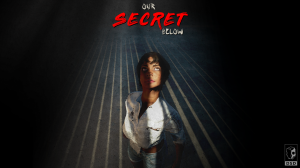