The dystopian future of Earth may be a cyberpunk mess in the Neofeud universe, but the future for the series itself is looking pretty darn good with the first details unveiled for Silver Spook Games' upcoming Neofeud 2.

Set in the same world as its predecessor but introducing a variety of new locations and characters this time around, the sequel takes place after a "coup d'etat against the posthuman, immortal Neofeudal Royalty." The "ultrarich" naturally push back, "fighting the redistribution of their quadrillions, even with the threat of the guillotine." Rioting runs rampant as "inter-species tensions increase between humans and the humanoid machines, transgenics, non-corporeals entering their communities."

Against this backdrop, "an ex-con robot from the slumsprawl ghetto and the radical socialist daughter of a billionaire wind up unwilling partners in the Coastlandia Police Department." When the pair are "called in to investigate a routine self-flying aircar crash, they uncover a spiraling conspiracy involving far-right 'Humanity First' groups, sentient machine neo-revolutionaries, and diehard remnants of hypercapitalistic Monarchies that will shake the social and cosmological fabric of the universe(s)..."

The game's first screenshots demonstrate the same kind of hand-painted, vividly coloured art style as its 2017 predecessor, while the initial video footage shows off the point-and-click verb bar interface and inventory collection that players can expect in controlling the protagonists and solving puzzles.

There is currently no firm target release date for this game, but best case scenario would see Neofeud 2 released sometime this year on Windows, Mac and Linux, though as a one-man production, development could stretch into 2020. To follow its progress in the coming months, check out the official website for additional details. 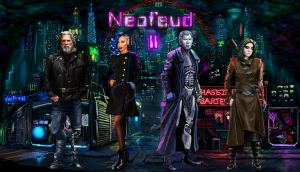