The best kind of pirate to steal treasure from would seem to be a dead pirate, but beware the curse of purloined loot, as the trio of anthropomorphic stars will find out firsthand (firstpaw?) in the upcoming Striped Swipers: When Booty Calls.

A precious gem embedded in the eyepatch of the legendary Captain Downbeard is on display at the musuem, and three "thickest of thieves" plan a daring heist. Just one problem, as "unfortunately the plunderous act awakens his spirit and he emerges, ready to haunt our beloved burglars." Peace is restored, at least temporarily, when "the gang manages to parley with Downbeard's ghost and strike an accord." All the three friends have to do is help him recover his lost treasure, and "not only will he leave them be, but they'll be allowed a share of the booty. Adventure awaits!" Inspired by the classics and designed by indie developer Joshua Casiano as a "2D love-letter" to adventure games, When Booty Calls is a colourful cartoon adventure that will see players travel from "the streets of NYC, to the belly of a sea leviathan, to a luxury cruiseship, and a few other fun locations," each of them filled with "all with the comedy, pointing, clicking, and item hoarding you all have come to love." Along the way, you will control all three protagonists with their different personalities, abilities, and even species. There's Freddy, the most charismatic and dexterous member of the gang, a "sarcastic and flirty rat who enjoys the thrill of his job;" the intelligent and durable Walt, a "genius ferret who is short in stature and temper;" and Ralph, the strongest and wisest of the three and a "bruiser of a walrus who prefers to solve things peacefully if he can."

In order to help deliver the game on Windows and Mac by October 2019, a Kickstarter campaign has been launched, seeking $10,000 (US) by November 19th. It you'd like to try before you... well, pledge, you can do that as well, as a downloadable demo is available, consisting of the entire first chapter of the game. 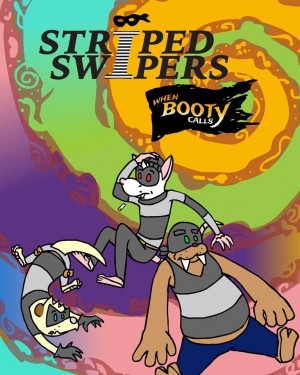