Darkling Room's "Crown" series has become the gift that keeps on giving. While we're still awaiting the full-fledged sequel Blackenrock, a new holiday-themed standalone installment called Silent Night is due to arrive in time for Christmas this year.

The new game sees players once again assuming the role of ghost hunter Nigel Danvers. This time around, Nigel finds himself caught in an "endless Christmas Eve" at Northfield Church and the ominously-named Carrion Woods, where "the wood-dwellers still haunt the pines and rocky places" whenever the North Wind brings heavy snow. Northfield's troubled history dates back to 1349, when "the Black Death swept across the land, killing over two thirds of the population...Everyone was blamed, from witches to wood folk, as the once kind people of Northfield turned on each other." On this night before Christmas it's the ghosts who are stirring, and "to break the trap and escape, Nigel must make a terrible decision on the loneliest night of the year."

Silent Night features the same largely black-and-white aesthetic as its predecessors, but with one major difference: now the world is in full 3D. Nigel can be controlled a number of ways, including directly through keyboard/mouse and gamepad, but also through the more traditional point-and-click style. Based on Cornwall's Duloe Church, the "main star of the game" is really Northfield Church, which has been "painstakingly recreated inside and out" to ensure authenticity.

While there is no definitive release date just yet, the goal is clearly to be finished in time for Christmas, we can expect the game to arrive on PC sometime in December. 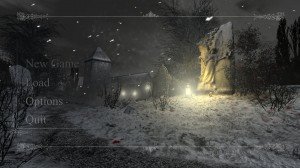