Wanton Rogue to come out firing later this year Western adventures are few and far between, but that's exactly what we'll be getting in indie developer Robber Docks' upcoming comic debut. The game is named after a group of outlaws who have recently "rekindled their love of wreaking havoc around the frontier." Players control a bit of a scoundrel himself, a "whisky drinker" who wakes up in jail when the Wanton Rogues ride into town and begin to cause trouble. His quest will be to stop the scattered gang members, but will this turn out to be "a last chance to redeem himself or will it just end up with him swinging two feet off the ground?" Along the way, you'll encounter "wild west towns with fully voiced characters, train robberies, eerie gold mines, high speed horse chases and everything you require from your journey through the dusty trails."

The setting isn't the only thing that hearkens back to another era. Wanton Rogue is an unapologetically old-school retro-style adventure, complete with "colorful 16-bit-ish wild west scenery filled with the good, the bad and the ugly" to go with its verb-based interface. You wouldn't survive the "dangerous landscapes" for long armed only with your wits, however, so here you can brandish your "trusty revolver, Winchester rifle or a shotgun to offer you defence." You'll need it, too, as the experience promises "a good amount of puzzles for you to solve and bad guys to shoot down." The latter will involve some "action filled gun fights", but an easy mode will be available for those who don't have the quickest of trigger fingers. Although easily played with the mouse, the game will also support keybaord and gamepad controls if you so desire.

The plan is to release Wanton Rogue incrementally though Early Access, with six locations planned in total. There is no firm launch date set just yet, but the first such location, called Waylonville, is on track for release later this year on Windows, Mac and Linux. To learn more about the game while you wait, check out the developer's website for more details. 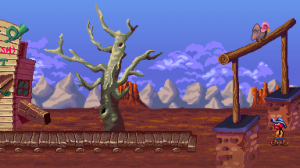