Sense to become reality thanks to successful Kickstarter

They may have fallen a little short the first time around, but indie developer Suzaku found success in their second Kickstarter campaign for Sense: A Cyberpunk Ghost Story, a mix of Blade Runner-esque dystopian science fiction with a classic J-Horror ghost story.

The year is 2083, and past and present are about to collide in Neo Hong Kong. Protagonist Mei-Lin Mak gets caught up in a centuries-old mystery while exploring the ruins of the ancient Chung Sing building, a crumbling ruin located right in the heart of this cyberpunk city. Using her cybernetic eye implants, which assist her in examining the environment and objects within it, she must investigate the story of 14 ghosts that are haunting the site, while uncovering some shocking truths about her own family’s history in the process.

The game’s anime-influenced art style lends itself well to a neon-lit cybernetic world that includes some fan service eroticism. A 2.5D adventure based around world exploration, narrative and puzzles, Sense promises a slow-burn horror tale that relies on atmosphere rather than jump scares. Mei-Lin is not an action hero, so this isn’t an action game (not that ghosts are susceptible to bodily harm anyway). Instead, she must rely on her wits and puzzle-solving abilities to deal with them. There will be dangerous elements to confront along the way, however, and players must manually save at scattered TVs to record progress.

With over a thousand backers contributing more than six times the target Kickstarter goal, Sense: A Cyberpunk Ghost Story is now aiming for a June 2019 release date on Windows, Mac, and Linux, as well as the PS4, Vita and Nintendo Switch. In the meantime, you can learn more about the project through the official website, and even sample an early alpha demo for yourself. 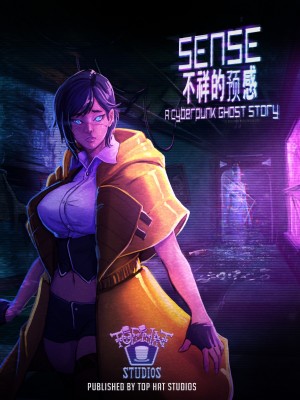