Have you ever wondered how F. Scott Fitzgerald’s The Great Gatsby might have turned out if J. R. R. Tolkien had written it? While Swedish developer Valiant Game Studio probably isn’t expecting to make the next Great American Novel (or Video Game, in this case), their upcoming episodic fantasy adventure Pendula Swing is looking to such celebrated works for inspiration.

Set in a “hand-painted fantasy version of the American Roaring ‘20s,” Pendula Swing tells the story of Brialynne Donu Tenúm, a dwarven hero whose “indefinite retirement on her idyllic island” is interrupted when she learns that  her famed battle axe has been stolen. To retrieve it, Brialynne returns to a world she no longer recognizes, with “strange music, a completely new fashion, fast moving steel horses and now goblins and orcs roaming the streets in broad daylight.”

Allowing players “unrestricted exploration and discovery of a living town, filled with interesting people and complex stories,” the goal of Pendula Swing is “to raise awareness [of] how prejudice and racism affects the everyday lives of people in the physical world, by using fantasy stereotypes.” As such, the setting may be “glamorous and optimistic” but its lustrous exterior hides “complex social issues between goblins, elves, orcs, humans and dwarves.” The game’s third-person isometric presentation will be accompanied by “challenging social puzzles,” in which the player must convince people to help them, and NPCs that “treat you differently depending on what you say,“ as well as branching dialogues that can play out differently with subsequent playthroughs.

Along with its literary inspirations, Pendula Swing is taking cues from the episodic nature of television. The game is planned as “7 episodes that can be unlocked one by one, or bought together,” with each episode both a “stand alone adventure, as well as a chapter in a larger experience.”

Pendula Swing’s first two episodes are scheduled for release this summer on Windows, Mac, and Linux, with the remaining episodes due to arrive in 2019. The debut installment, titled Tired and Retired, will be free to offer gamers an initial taste of what the rest of the series will have to offer. In the meantime, you can head over to the official website for more information and even an opportunity to participate in the upcoming open beta prior to release. 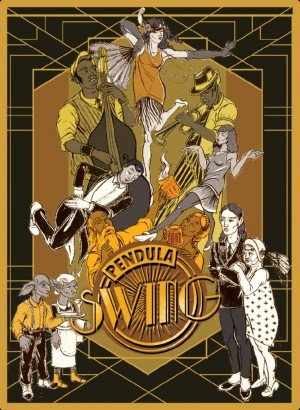