It's not our place to pronounce who the devil awaits (if you think you're one of them... repent!), but we can tell you that The Devil Awaits VR is now available for mobile VR devices.

The game stars a man named Rick Johanson, who is "escaping from the police after a bank robbery when he finds an abandoned cabin to take shelter in." But it turns out this is no safe haven, and "it does not take long until he finds himself fighting against the devil who [has] been capturing the souls of innocent people of the region." You may be an unlikely hero, but it will be up to you to "investigate the cases, and expel the devil if you want to get free and return home."

Designed exclusively for virtual reality, The Devil Awaits VR features realistic 3D environments to explore for items to collect and use, as well as incremental new story details to piece together. Along the way, players will need to solve some light puzzles and occasionally evade others through stealth.

Originally released for Gear VR back in late 2017, now The Devil Awaits VR has made its way to Android, offering a free sampler on Google Play consisting of "the forest, the lost hut and half of the dungeon area," with the remainder of the game available through in-app purchase. (Note that the Android version requires a Bluetooth gamepad and a VR-compatible smartphone with a gyroscope.) 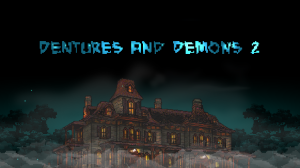