You know all those adventure games with cute and cuddly anthropomorphic animals? Well, forget about them! The animals in the upcoming Mutagenesis: A Wasteland Odyssey are nothing like that in a post-apocalyptic adventure in which only mutated creatures have survived.

The world of humankind ended after "all pharma companies in the world joined forces to become one big, evil corporation" and proceeded to destroy the environment beyond repair. Their chemical waste abuses caused the animals to mutate and then rebel against humanity, "who in turn nuked the whole world. The animals, whose DNA had already been screwed over by the mutations, survived the radiation. Humanity did not." Unfortunately, the elimination of mankind is not the end of the world's problems.

Players primarily control a cat named Archie Shipp, who has been separated from his wife Penny and son Thelonius and must now attempt to get get back to their "pretty nice house" in Shelter City. Trapped in the den of a frog named Calypso, along with "the chihuahua Charlie who has had just about enough of being her lapdog," you must first find a way to escape and then overcome the "increasingly absurd challenges" you encounter together on your way back home. Meanwhile, in Achie's absence "three mean squatters lead by the walrus Maul Buckling have moved in and are pushing Penny to remarry," along with attempting to sieze control of Shelter City's leadership. Here you will guide Thelonius at times, as he attempts to push back against their influence and figure out what happened to his father.

The game's first screenshots show off the distinctive hand-drawn art style and introduces some of the unique character designs of its cast of mutants. Inspired by the point-and-click genre classics, Mutagenesis will seek to find the "golden ratio between story and puzzles", though to ensure that the experience caters to as wide an audience as possible, the indie Danish developer plans to offer both a "puzzle mode and a story mode where the player can choose between a heavily story-focused experience or a more puzzle-focused experience."

We're still a fair way off from seeing the completed version of Mutagenesis: A Wasteland Odyssey on Windows and Mac, as the launch dates is currently targeted at late 2019. Even that could be contingent on a successful crowdfunding campaign at some point, but while waiting you can follow the game's progress through its official website. 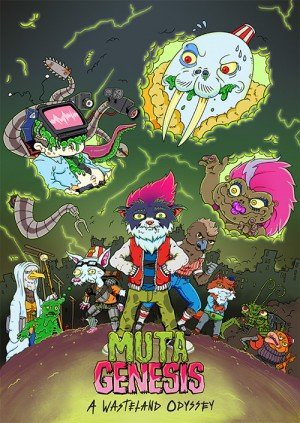