Alike Studio has a habit of sending lone explorers around the universe on rescue missions... and let's be glad they do! Following the popular 2016 mobile release of Love You to Bits, now the indie Spanish developer is back with a new "cute and accessible, purely visual, family-friendly" puzzler in the newly-released Bring You Home.

The game follows the exploits of Polo, a "humble alien hero who will venture into dozens of worlds in a frenzied chase to rescue his kidnapped alien pet and catch its evil captors." As far as story goes, really that's about it, but what the game lacks in narrative depth, it more than makes up in gameplay, as we're promised "oodles of levels stuffed with magical characters, bizarre surprises, and many treacherous dangers – and you’ll never know what’s gonna happen next."

Presented as a stylish hand-drawn side-scroller and looking more like a platformer than a standard adventure, what really makes Bring You Home different is that "you don’t control the hero, you control the level itself!" Rather than having Polo collect inventory or perform daring physical acts to bypass obstacles, here players will directly manipulate the environment. With the scenery split into discernible columns, you must "rearrange the pieces of every level to unveil the right path for Polo." This encourages experimentation, which will inevitably lead to failure, but rest assured that anytime that happens, you can "just go back in time and rewind the level if poor Polo finds a deadly but hilarious fate."

For now, Bring You Home is available exclusively on the App Store for iOS and Apple TV. As the developer's previous game also made it to Android (with a PC version still expected at some point), hopefully the new game will expand to other platforms as well, though this has yet to be confirmed. To learn more about the game, drop by the official website for additional details. 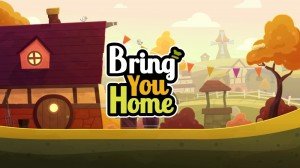