The very nature of adventure games requires us to adopt all variety of playable personas, but rarely are we called upon to do so in the same game as often as we will in D'Avekki Studios' upcoming The Shapeshifting Detective, a new FMV mystery from the creators of The Infectious Madness of Doctor Dekker.

When a series of redheads are killed across town without any identifiable leads, players are tasked with employing their unique paranormal shapeshifting gift to help solve the case and hopefully prevent any more deaths. It seems that "no one knows who will be next, except for three fortune tellers with the uncanny ability to predict murder. It’s your job to find out what else they know – but they won’t reveal their dark secrets to just anyone. Luckily, you can be anyone you want to be. Even the next victim…"

Like the developer's previous game, The Shapeshifting Detective uses 100% live-action HD video and dialogue mechanics to tell its mysterious story. This time around, however, instead of a single office there will be multiple locations in which you can "have a look around (via FMV cut scenes)" and engage in conversation. The latter represents the core gameplay element, but rather than a text parser, here players will have scripted lines to choose from. Making progress won't be as simple as choosing the correct responses, though. Not only will it depend on which character you've chosen to impersonate to seek out different angles – there are many to meet and select from, or you can just be yourself, as the detective – but you can even delete certain dialogue choices to see what happens. The story branches according to different decisions made, and with three potential culprits randomly selected, the game can be replayed for a much different experience.

Travel though the various city locations will be done by taxi. That in itself is not uncommon, but another unique feature of The Shapeshifting Detective is what happens during transportation. You can get help from the driver who will take you to the recommended destination, or just sit back and listen to the "streaming radio broadcast with a variety of programming," among which will be "five short atmospheric stories" chosen from public submissions currently being accepted.

If all goes well, we could see The Shapeshifting Detective in its final form as soon as the end of this year for PC, though both platforms and launch target are subject to change in the coming months. 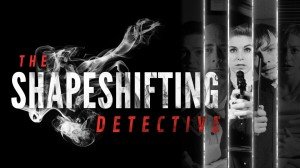