Portugal may be the third best country on the Global Peace Index, but for the second time in four years, it's got a serious crime problem! Fortunately, Detective Case and Clown Bot are on the job again, or will be when their second adventure, The Express Killer, is released early next year.

Having solved the suspicious "suicide" in the Hotel Lisbon back in 2013, now Detective Case, the world's "worst detective, a man so rough and rude that his witnesses would rather be run over by a slow-moving freight train than to be questioned by him," and his mechanical sidekick Clown Bot, stand-up comic, "joke machine" and wannabe circus performer, must figure out who has been murdering the passengers aboard the train from Lisbon to Porto each day. To do so, they must "bother everyone by asking annoying questions, pick up everyone’s belongings and call them clues, drink and eat for free at the bar (because they are working after all!) and if all goes well, find and stop the express killer." And in between, they'll also need to babysit a colleague's kid who's been dragged along for the right. After all, "what could go wrong, right?"

Although a sequel to Murder in the Hotel Lisbon, indie developers Nerd Monkeys claim that no prior knowledge is necessary to enjoy The Express Killer. Promising "trains, humor, mystery, horror, drama, and cod fish," the new game features the same retro-styled, low-resolution pixel art presentation as its predecessor, intended to take players "back to the good old classic point-and-click adventure formula from the '80s and '90s." And once again, due to popular demand, the action will be accompanied by a soundtrack mixing classical orchestra and modern rock.

It'll still take a few more months before this train reaches the rest of us, but Detective Case and Clown Bot: The Express Killer is currently on track for release on Steam for Windows, Mac and Linux in early 2018. 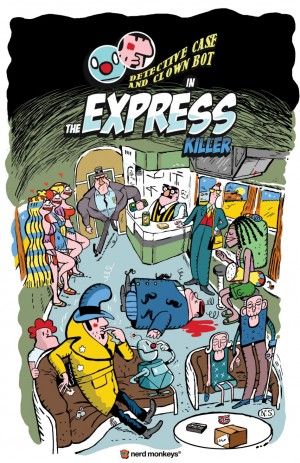