Despite their inviting touch-screen capabilities, there are disappointingly few point-and-click adventures made for mobile phones and tablets these days other than ports and room-escape titles. One game willing to buck the trend is a comic sci-fi adventure from indie German developer Damian Thater called Argh! Earthlings!

The central argh-worthy earthling in question is the game's protagonist David, a "young, slightly left-handed hobby astronomer, who one day accidentally shoots down an alien spacecraft using his self-made model rocket." He also manages to conk himself out with the rocket, just as the UFO crashes to the surface. When he awakens, he finds himself in a strange bed on a small farm, with special government agents "lurking everywhere" on the trail of the downed alien. As he's the one responsible for the accident, it's up to David to make amends by secretly helping the "really upset alien named 'Fred' to escape from earth" without either of them getting caught.

Using a simple single-tap control scheme that's been optimized for mobile devices, Argh! Earthlings! is presented in a whimsical third-person cartoon style, promising more than 50 locations to explore, up to 40 items to interact with, and 20 characters to meet along the way. With multiple puzzle solutions available in some cases, this won't be a long game but should provide at least an hour of "humorous, old-school" adventuring goodness.

Available for now exclusively on iOS, Thater is planning an Android port for release this winter. 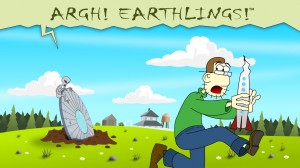