What if you met someone briefly in a bar, only to find out later that the same person you met has completely changed in disturbing ways? This is the basic idea behind Calligram Studios’ Phoenix Springs, an upcoming “neo-noir mystery adventure” which has been successfully funded through Kickstarter.

Phoenix Springs tells the story of Iris, a woman who meets a young man in a bar, only to lose track of him for a while. When she finds him again, “something is not right. He has become a recluse. He is a billionaire. And most terrifyingly of all, he’s dying of old age.” In order to solve the mystery of what has happened to him, “she travels to Phoenix Springs, a desert oasis, home to a strange community.” It seems to be a paradise, but “under utopian appearances, she soon realizes the inhabitants conceal dark secrets that are hard to unveil – and harder to believe.”

The art style is reminiscent of games such as Journey, combining 2D art and 3D modelling to create an unsettling and dream-like atmosphere. Interestingly, Phoenix Springs actually started as a plan for a feature film, but eventually evolved into its current status as a video game. Gameplay is inspired by point-and-click adventures and choice-based cinematic games, featuring mouse-driven mechanics and branching dialogue. In order to avoid frustrations like try-everything-til-it-works inventory puzzles, however, the developers have taken an approach they call a “concept”-based inventory, comprising memories, questions, and conversation topics to be applied in the appropriate place. In this way, Calligram claims that “the puzzles are not obstacles in the way of the story. The puzzles are the story.”

Phoenix Springs is scheduled to land on Windows, Mac, and Linux in March 2018, with Android and iOS versions also planned. Those interested in learning more about the game, or pre-ordering a copy starting at €15, should head over to Calligram Studios’ official website. 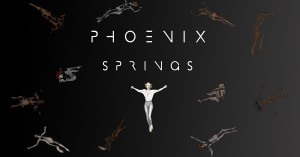