Where in the world can a “lazy, good-for-nothing, two-faced guy” be “rewarded with fame, women and power,” not to mention a powerful boost to his political career? According to indie developers Paolo and Andrea Fazzini, collectively known as the Fazz Brothers, it’s in their native Italy in their upcoming point-and-click episodic comedy, BELPAESE.

BELPAESE (meaning “beautiful country” in Italian) tells the story of Peppe Nappiotto, who returns home with no degree, no job, and no money after spending 10 years at Milan University. Forced to face his disappointed mother, the “biggest challenge of his young life,” what can he possibly do to redeem himself? Simple: jump into Italian politics and its “circus of grotesque characters full of colorful, unintentional humor!”

Played in third-person and presented with 2D cartoon-style graphics, the game promises a familiar adventuring experience, with inventory puzzles and a basic dialogue system heading up the gameplay. The developers admit that politics is an “unusual topic” for an adventure game. However, the three-part series plans to use Italy’s “well known” reputation for having a political system “full of crazy twists and turns,” ruled by “buffoons notable for being deficient in brains, a strong work ethic, not to mention being decent human beings.”

The debut episode of BELPAESE, called Homecoming, is scheduled to land September 28th for Windows and Mac, as well as Android and iOS mobile devices, with the next installment planned for roughly eight months after that. More information about the game can be found at the official website. 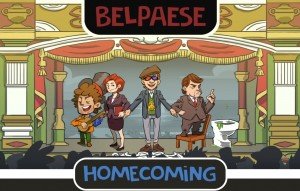