Lack of replayability is a fact of life for most adventure games, but the opposite is true for Vidar, a randomized, story-driven adventure that has just come out of Steam Early Access. In Vidar, it's the inevitability of death that makes it so replayable.

The people of the eponymous small town are dying, one by one. Caught in the middle of a blizzard, Vidar is also at the mercy of a beast who kills a villager every night, forcing the remaining inhabitants to "confront their impending deaths." The townsfolk have "heavily interdependent relationships," so "when one person dies, everyone else’s stories change." In order to save as many people as you can, it is up to you to enter a "puzzle dungeon" and "use your tools and your environment to help navigate to the center of the cave before everyone in town is dead."

The exploration of themes like "grief, community, nostalgia, [and] loss" is a little darker than usual, and the bird's-eye RPG-style presentation is less common in the adventure genre, but what really makes Vidar stand out is its randomization – not just of the story but the gameplay as well. An arbitrary narrative path is predetermined each night, and "because the order of deaths is random, the story and quests you receive will be different every time you play." What's more, the environmental puzzles encountered throughout the four distinct "biomes" (each with "new takes on classic mechanics") will be randomly selected as well, chosen from a "bank of hundreds" to provide new challenges each time you play.

In Early Access since January, the final version of Vidar is available now on Steam for Windows, Mac, and Linux. A playable demo is available to download on Steam as well, and you can learn more about this highly ambitious project through its official website. 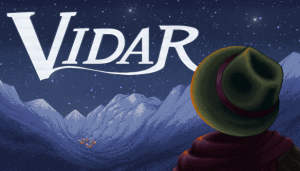