Minecraft is all about building, so it should come as no surprise that Telltale plans to build on the success of its own Minecraft: Story Mode with a new five-part season beginning next month. The second season once again follows (either male or female) Jesse and his/her friends on a grand new adventure, and just in the nick of time. Having previously "vanquished the Wither Storm, saved the world, and become totally super famous heroes, life has gotten a bit more...complicated." Now stuck with reponsibilities to fulfill instead of being intrepid explorers roaming the world, "old friendships have started to fade – at least until Jesse's hand gets stuck in a creepy gauntlet that belongs to an ancient underwater temple." And so begins a whole new odyssey with "old pals and new comrades alike" that promises to be "filled with tough choices, good times, and at least one temperamental llama."

The new season sports the same blocky art style as before, with voice actors like Patton Oswalt, Catherine Taber, Ashley Johnson, and Scott Porter returning to reprise their key roles. While Season 2 picks up after the events of its predecessor, and decisions made the first time around will carry over here, there is no prior familiarity needed for newcomers to jump right in. And if you want to play socially, this game will also include Telltale's "Crowd Play" feature, which "allows friends and family to engage with the adventure together by helping to decide the direction of the story from any mobile device with an online connection."

The first episode, Hero in Residence, is already close at hand, with a digital launch date scheduled for July 11th on Windows, Mac, PS4, Xbox One, iOS and Android devices. A physical disc version is planned for later this fall. 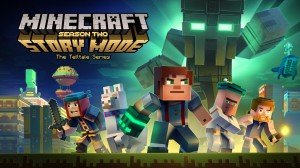